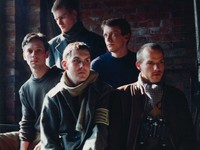 Check out the new-wave guitar rock of British Sea Power, a British quintet from Brighton that is mostly known for playing their live shows in Word War I uniforms (for no apparent reason). Their most recent album "Open Season" is more hooky than its punky debut and will remind many of The Cure, The Pixies and David Bowie. Some have even compared British Sea Power to the Killers, but combining synths with indie rock doesn't make you sound like the Nevada foursome. Pitchfork writes about the lyrical depth on "Open Season," and points out that the grand and melancholic  "It Ended At An Oily Stage" might seem a love song, while it is in fact a song about somebody who passed away.