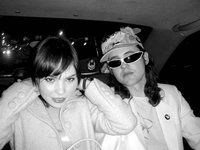 Kaz Gamble and Sisely Treasure first met in an AOL chatroom to talk about music. They struck an immediate connection when they found out they shared the same musical tastes. Kaz was looking for a singer for his new pop project and invited Sisely to join him in the studio to record some demo tracks. That's how Cooler Kids was born. The group was signed to Dreamworks records and scored a Billboard dance hit with the infectious single "All Around The World."

Two years later, Cooler Kids are no longer. Instead Kaz and Sisely have continued their collaborations as BoygirL. Their music can best be described as dance pop without the sugarly overtones. It is fun without being too frothy.

I remember speaking with Kaz and Sisely in Dallas when they were touring with Erasure in 2003. The crowd fell in love with Sisely's spunky sense of fashion and stage performance. Mix in Kaz' clever pop hooks and addictive dance beats and what you have is serious hit potential. Check out "Krush" and some other new tracks on the band's web site. Spread the word.

Update: Some of you have emailed me to learn more about the fate of Cooler Kids. This is what BoygirL's manager emailed me this morning: "When Dreamworks was bought by Universal Music Group in 2003, Cooler Kids were briefly signed to Interscope before being dropped in the shuffle. As of yet there is no new recording contract in the works but Kaz and Sisely are continuing their boygirL project, they are also thinking of doing a few new Cooler Kids tracks, and they are pursuing individual artist projects - Sisely is working on dance pop tracks with an LA dance producer, Kaz is producing singers, (one of whom was a back-up dancer for Madonna's last tour) and is starring in a reality makeover music show (Rock Aroundthe Block) on Saturday night on ITV in the UK."