arjanwrites.com: The Killers to Perform at MTV Video Music Awards

The Killers to Perform at MTV Video Music Awards 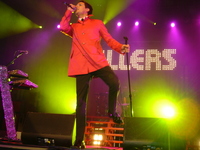 MTV announced a couple of hours ago that the Killers and Mariah Carey have been added to the exclusive line up of artists performing at the MTV Video Music Awards later this month in Miami. A big congrats to Brandon Flowers, David Keuning, Mark Stoermer and Ronnie Vannucci who have grown from a small indie band to one of the most commercially successful acts of the year (even USA Today notices today). A good example of how decent artist development still pays off in the age of throw-away pop.

The MTV press release notes that the Killers' "Hot Fuss" has sold more than 4 million copies worldwide and is in its 57th week on the Billboard 200 albums chart, which makes it the #8 best-selling title of the year. The group has generated four MTV VMA nominations for "Mr. Brightside" - Best Group Video, Best Rock Video, Best New Artist In A Video, and Best Art Direction In A Video.

The band will be performing to promote the upcoming "Hot Fuss" Limited Special Edition Package that will include special artwork and 3 bonus tracks ("Glamorous Indie Rock & Roll," "The Ballad of Michael Valentine" and "Under The Gun"). never released before in the United States. (Toronto concert photo via a Killers fan)