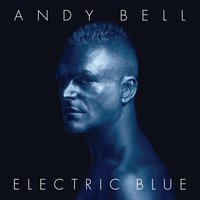 It seems that Andy Bell has taken most of the inspiration for his solo album "Electric Blue" right from the dancefloor.  In fact, if Bell had to come up with an alternate name he could just as well have titled the record "Confession On A Dancefloor" (just like her). After scoring hits with pal Vince Clarke in Erasure over the past two decades, Bell comes full circle with an album that celebrates all the good of pop, all the fun of disco and all the drama of the dancefloor.

The record counts fourteen tracks and includes duets with Scissor Sisters' Jake Shears and Claudia Brucken. The album was co-written and recorded throughout 2004 and 2005 with Manhattan Clique (Philip Larsen and Chris Smith) who have previously worked with Erasure, Moby, The B-52's, Stereophonics and Goldfrapp. The reocord will be released in the U.S. on October 4. (Click here to pre-order "Electric Blue" from Amazon.)

Read brief song by song reviews of "Electric Blue" after the jump.

The album kicks off with a fine piece of electro-bliss on "Intro." Consider it a brief warm up to the electro thunder that is about to unleash itself. Bell declares the dancefloor open with the synth stomper "Caught In A Spin" that includes some Spanish guitars which gives the tune a nice organic touch. The album reaches its first climax on track #3, the single "Crazy." The song is clearly the most obvious single choice. Bell knows that you can't go wrong with a deliciously hooky chorus and his choir boy vocals. This one will be stuck in your head after first listen. Bell speaks his truth on "Love Oneself," a duet with Claudia Brucken. Bell sings, "Life is a riot. We only have one life. This is not a rehearsal." Just like I said. This is perfect dancefloor stuff.

The next track is the much-anticipated duet of Bell and Scissor Sisters' Jake Shears on "I Thought It Was You." It is a fat slice of disco funk with Shears' high-pitched vocals craftfully layered over Bell's singing. The song is not particularly catchy, but mostly spotlights the teaming of two gay music icons. The sci-fi title track "Electric Blue" features a dirty, dark bass line and '80s handclaps. Bell lays out every gay man's issue in this song when he sings, "Pain in my heart. Pain in my soul. Pain my feet." Yes, that is right. The dancefloor is gonna get you.

"Jealous" shows off Bell's terrific songwriting skills. He is able to pack big emotions into (seemingly) simple lyrics. "Shaking My Soul" is a festive pop song featuring a horn section and group backing vocals while Bell has memories about "back in the day." "Runaway" is a fitting, mid-tempo electro ballad that comes just in time to take a short break from Bell's dancefloor.

Bell delivers some of his finest lines on the electro-clash, Warren Fischer-style "I'll Never Fall In Love Again," when he confesses so poignantly, "They say still waters run deep, and now I'm clinging to the shore." On "Delicious," he once again reunites with singer Claudio Brucken for a duet. "Fantasy" is a heartfelt singalong ballad that is low on synths but high on emotion.

Once of the album's highlights is "See The Lights Go Out" that brings Bell's dancefloor bliss to an end. While the DJ is about the spin his last tune, Bell sings "I'm searching for the angles in the sky. I'm loving this sensation tonight." The album concludes with "The Rest Of Our Lives" that serves as a dancefloor cool down with piano and acoustic guitar that oozes Bell's positive, lust for life attitude.

This album represensent some of Bell best songwriting and his unique, spirited vocals. Also, Manhattan Clique have added their own electro spin to give Bell truly a sound of his own. (Click here to pre-order "Electric Blue" from Amazon.)