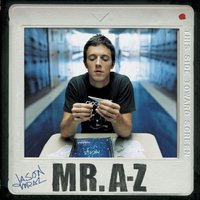 Jason Mraz returns next week with his new album "Mr. A-Z." After scoring the mega hit "The Remedy" in 2003, Mraz went on an extensive tour to play songs from his debut album and meet fans around the world. Currently, he is on tour in the U.S. opening for Alanis Morissette. During the 2004 presidential elections, the singer took a strong political stand on his blog, and was a vocal advocate of equal rights for gays. Together with legendary producer Steve Lillywhite (U2, Rolling Stones, Dave Matthews Band) he collaborated on his new album. "Mr. A-Z" lifts Mraz up to a new level of maturity that makes him more than a one-hit wonder. His endearing goofiness and humor is still there (listen to "Geek In The Pink" and "Wordplay" ), but his sentiments have grown stronger as shown on "Song For A Friend" and "Plane." This new record proves that Jason Mraz is a songwriting force to be reckoned with.

Make sure to check out my interview with Jason in the August issue of GENRE.