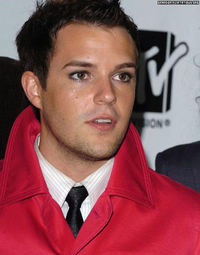 There is no denying that the Killers are having an incredible year. The band's debut "Hot Fuss" is high up in the pop charts around the world and their break-out hit "Mr. Brightside"  even cracked the Billboard singles top ten here in the U.S. It is seems that their relentless touring to get their music noticed is finally paying off.

I spoke with lead singer Brandon Flowers early April in Long Beach, CA and a few days later in Los Angeles, CA about the success, the new album and the gay rumors surrounding his persona. Much of the interview is published in this month's GENRE Magazine.  A portion of the interview did not make the final edit and is featured today on Arjan Writes (I posted some of Flowers' comments about the Bravery earlier). Flowers discusses the band's new record, Britney Spears and his religion among other things.

Congrats with the success of your sold out U.S. tour. It seems you guys have been touring non-stop for the last 18 months...
Yeah, it has been a long year and half.

I heard you played some new songs…
Yeah, we play two new tracks "Stereo Of Lies" and "Where Is She." [The band has featured other new tracks after this interview took place.]

It must be fun to mix in some new stuff...
It feels really good to us. We have been playing twelve songs for so long now and to play some new ones sounds really fresh.

With all this touring how do you stay in shape?
I think our show is a work out for us. I don't feel I'm doing my job unless I'm sweating.

You had a Mormon upbringing. Was your experimentation with fashion and make up allowed? Were you a bit of a rebel?
I wouldn't say I was a rebel, but I don't think the make-up would go down so well at church.

Does religion still play an important part in your life?
Oh yes. I believe in God and everything very much. My faith is very important.

Do your religious values impact how you feel about gays and their equal rights?
No. I think everybody should have equal rights. The church that I am in has never been opposed to that. It is a very tolerant gathering.

When will you start to record the new album?
We are looking at October or November for that. The new record should come out early 2006.

What will be the mood of the album?
I think it is going to be a little more organic. There will still be keyboards, but also natural sounds like piano and organs, and also a lot more vocal harmonies. Ronnie, our drummer, has a mic now and he'll be singing along more. It is going to sound a lot of more classic.

Time for some quick word association:

Fame
… What you get is no tomorrow

Andy
… Andy was a friend of mine