Video Premiere: Mylo "In My Arms" 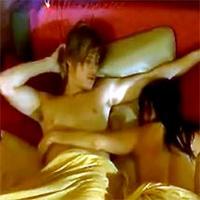 The big boys of Sony BMG have stepped in to bring Mylo to the masses this summer. The release of Mylo's new single "In My Arms" is the first through his own Breastfed joint venture with Sony BMG. The song is one of the stand-out tracks on "Destroy Rock and Roll" that will be released with additional bonus tracks on May 23.

"In My Arms" is poised to become a major summer hit in Europe and Australia. British Channel 4 nicely sums up this warm and fuzzy video: "Now you can be as 'arty' as you like about these things but at the end of the day you really can't go wrong with two really fit people getting off with each other somewhere sunny."

The track itself might sound familiar. It combines samples from Kim Carnes' "Bette Davis Eyes" and Boy Meets Girl's "Waiting for a Star to Fall." The CD single features mixes by Linus Loves, Sharam Jey and M.A.N.D.Y.