"k.d. lang  releases her new single 'Simple' through Nonesuch Records on June 6.  'Simple' is taken from k.d. lang’s latest album, the critically acclaimed 'Hymns of the 49 th Parallel.' 'Simple.' co-written by lang and bassist David Piltch, is a no-minced-words declaration of love that she originally recorded in 2000 for her dreamily romantic pop collection, 'Invincible Summer.'" (via contactmusic.com)

Sample the excellent new mixes of New Order's "Jetstream" that are featured on the extended single CD. The track features Scissor Sisters' Ana Matronic on vocals. The remixes of the song are done by some of today's hottest remixers/producers, including Jacques Lu Cont, Richard X, Tom Neville and Arthur Baker. Richard X is also known as a producer and songwriter for Annie, Sugababes and Rachel Stevens.

Jem "Just A Ride" Video
Check out Jem's second video after the singer has had her first chart success with "They" in the UK.

Washington Blade Interviews DJ Tracy Young
"Truthfully, being a female DJ has worked for me in some situations and against me in others. Every situation is different, but overall, I guess it has helped me to stand out."

NME interviews Brandon Flowers
"There is a new jacket. It's another pink one."

Norwegian A-ha prepares a new album
"Due to release in September, the album has a whole different energy and soul."

RollingStone.com: Oasis Review
"Now that they've fought off complacency and cocaine, can we get that Behind the Music episode?"

Fischerspooner Interview
Fan-tastic interview with Casey Spooner. Thanks for mentioning my blog to Casey, Lara!

At the risk of turning into a Fischerspooner fansite, I highly recommend the new video for Fischerspooner's forthcoming single "Never Win" that was released today. I wrote earlier about the duo's inspiration for the song. It is a brilliant video that combines the duo's sense of experimental art with a glossy pop finishing. Counter culture goes mainstream. Check out a goofy Casey performing as the lead singer in a band and getting hit by a bottle. Well-done guys. 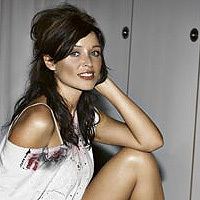 While Kylie Minogue is recovering from breast cancer treatment at home in Australia, her sister Dannii will be headlining the 7th Annual Gay Day at Paramount's Great America tomorrow. A portion of all proceeds will benefit the San Francisco Aids Foundation.

Danni shared her compassion and concern for her sister in a public statement, "This news is very upsetting. However the cancer has been diagnosed at an early stage and we are all very optimistic that everything will be ok. We’re all very thankful for the endless messages of love and support Kylie has been receiving – I know all your kind thoughts will mean the world to her as she gets better."

"Kylie's been touched by the many fans who have asked if they can send cards or flowers," her sister adds. "She has suggested that instead well-wishers might like to make a small donation to the Cancer Council in her name."

Meanwhile, Dannii is in the final stages of recording her much-anticipated fifth album. The first single "You Won't Forget About Me" was released in Europe last year.

Listen to Dannii Minogue "You Won't Forget About Me"