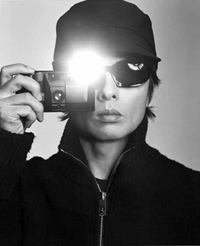 Kylie Mingoue's vocals are featured on "Sometimes Samurai," a new track by Japanese DJ/Producer Towa Tei. The track appeared on Tei's new album "Flash" that was released in Japan last week. Most of you might remember Tei as one of the founders of Dee-Lite. Tei and Minogue collaborated earlier on a track called "G.B.I." (German Bold Italic) on which Kylie performs in the character of a typeface.

A demo version of "Sometime Samurai" was first recorded in 1996, but it was not until last year that the song was finished. Tei describes the track as "Nu 'Japanese Curry' Wave," which is the appropriate term for this quirky (but catchy) pop track that is based on the crunchy electronica Tei has put out in recent years. (Thanks to Mac for tipping me.)