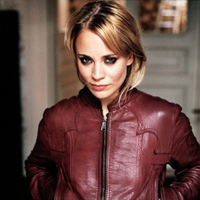 Annie recently came to the U.S. to showcase songs from her upcoming debut "Anniemal" (in stores June 7). I spoke with the Norwegian for more than an hour in her suite at the Tribeca Grand Hotel in NYC right before her performance. She spoke openly about the hype surrounding her album, bloggers, the loss of her boyfriend/producers and gay fans. Most of interview will appear in the June issue of GENRE, but here are a few bits that were left out of the article due to space constraints.

Did you have a big idea behind "Anniemal"?
Not really. I had no idea what I wanted the album to sound like before I went into the studio. I live in the same city as Royksopp and we were always talking about working together. So I was sure I wanted to do something with them. In the studio, we just tried out a lot of things -- create sounds and go with the flow really. I did have a lot of my lyrics written before we started recording.

How was it for you to be so involved with the making of the record?
That worked very well for me. I'm a bit of a control freak, so I like to know exactly what is happening [laughs]. I was a bit worried for a while because I was working with three different producers, so I was worried the album would sound like a compilation of different sounds.

Your boyfriend and producer passed away right before you started the recording sessions. Do you think  music was an outlet for you to deal with your loss?
I always think that was not the case, but it may have been. I think what did happen was that when you go through something difficult like that that you have a goal. Something to look forward to. I think the outlook of making a record was that goal for me. I actually had a much stronger will to get it done.

So in a way he was still very much part of the whole effort?
Definitely. He taught me a lot about production. Before I was very much into melodies and not so much into the technicalities of the sound. He changed that and you can hear that on the album. Also, he produced the song "Greatest Hit," which is included on the CD.

On a much lighter note, why do you think the Nordic countries put out so much good pop music?
I think you have to make a distinction between Norway and Sweden. Sweden has a long tradition of pop singer/songwriters, starting with Abba. But in Norway we had Aha in the '80s, but not much came after that. I think now with me, Royksopp and Kings Of Convenience there is again a lot of interest in music from Norway. Bergen especially is a great city for music now. It is a small scene and many of the artist are friends. It is very easy to work together.

Your songs "Chewing Gum" and "Heartbeat" became really popular in the U.S. thanks to the support of bloggers. How do you feel about that?
The support I have gotten is unbelievable. I never thought that album would reach the U.S. To me my sound is very European.

Do you ever read popular music blogs like Fluxblog or Stereogum that initially picked up your music?
No, I haven't. But I probably should. I read Pitchfork quite often.

How do you feel about people sharing your music online?
I think that is fine. It is a great way to get noticed. As long as they also buy my album [laughs].

Did you know that a lot of conservative rock critics are rooting for you…
Yeah, it is weird, but it is hard for me to comment on it, because I just do what I like and it is great that everybody seems to like it too.

Time for some quick word association. What are your thoughts about:

Gays
… Do it better