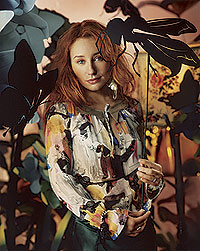 Imagine you have a few minutes with Tori Amos and a million questions to ask. That's what happened when I spoke with the singer/songwriter at LAX early in the morning while she was en route to Chicago for another CD promotion. Fortunately, Amos had enough to speak more about the vision behind her new album "The Beekeeper," equal rights for gays and the influence of religion in today's society and in her own life.

I bet you don't do many interviews at this time of the day. Are you a morning person?
[Laughs] Right now, I am. I've been doing interviews in Europe and America, and I got into Los Angeles a few days ago. I'm lucky I'm still on European time that helps me to wake up early.

Now that we're on the topic of time and day… Is there a particular time of the day that you are more inspired?
Yeah, there is a time in the late afternoon that I find really inspiring. When I'm on tour that is usually the time that we're rehearsing. When I was making this record, we did a lot of work in the late afternoon. I recorded the CD at home in Cornwall and you have this beautiful light at that time that creates a special ingredient of mystery. It is when the business world stops and no longer drains the energy from the atmosphere and people can finally relax.

"The Beekeeper" has received rave reviews from most critics. You must be feeling pretty happy.
Of course! I have to admit that a honeybee like me likes a good buzz. [Laughs]

Is it still important for you to know what the critics think?
I don't read reviews but that doesn't mean I don't take on board a good comment. I'm aware that when my work gets out into the world that I can't control what people are going to think. And some people might not like the style that I'm tapping into. But I'm a pretty vicious critic of myself. Some of my friends are critics and they often listen to my new work as well before it gets out to the world.

"The Beekeeper" is a multi-layered, complex body of work. How would you sum up the big idea behind the record?
As you know Europe and America have quite a tension, which is getting greater and greater. I've spent a lot of time in both places. It felt very necessary to try and create my own world that could maybe emancipate some of the ideas and opinions that Europeans have of America and Americans have of the world.  In the three major religious of the world the symbol of the garden is used as an allegory. I created my own garden that is not based on the patriarchy, but where the divine Great Mother Sophia is at the core. I wanted to emphasize femininity through biblical symbolism.

The songs and the photography on the album include images of fruit, butterflies and bees. How does the metaphor of the bee play in your work?
The bee tradition is one of the great feminine mysteries. The honeybee represents sacred sexuality. So on the record we don't go to the garden of original sin, but we go to the garden of original sinsuality. My way of preserving the earth from becoming a wasteland is to eat from the forbidden fruit. And every song on the album is about that by examining each relationship in my own life.

As on your previous record you take a strong political stand…
This is the time we're being called upon to stand in truth. You are what you believe. There is no plastic surgeon who can change that. I'm what I believe. I talk it, I walk it and I see it. I believe that that is contagious. Right now, prejudice against other lifestyles has become contagious. We've to beat that.

We spoke in the past about equal civil rights for gays. What is your take on some of the recent development regarding gay marriage?
According to the [United States] constitution, there are certain inalienable rights. There are now people who decide what rights certain people should have while it doesn't harm another person. This is where we walk into the hijacking of Jesus' teachings and twisting them in order to enforce a morality that comes from an extreme sect of America.

How do your own religious values play into this?
I grew up in a very Christina home. I'm a minister's daughter and had a devoted Christian upbringing. I know the bible and I know the teachings. I'm very concerned also about the Gnostic gospel that was found in [Egypt's town of] Nia Hammadi in 1945 that shed a very different light on Christianity that we've been taught.

So how do you think we can combat these extreme viewpoints?
This is not the time that you can believe that you can change people that are close-minded. This is about being smarter than those who are trying to suppress. This is about going back to mythology and allegories, and it's about opening minds. I don't believe you can open minds by being aggressive. This is all about love. In the end, we have to outlove them.