arjanwrites.com: Interview with Brandon Flowers of the Killers

Interview with Brandon Flowers of the Killers 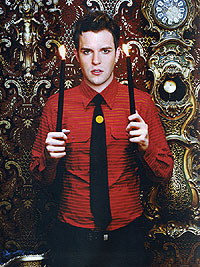 Brandon fires back (photo via Spin)

(Exclusive) Last night, I spoke with the Killers' Brandon Flowers right before the band's gig in Long Beach, CA. One of my questions zoomed in on the recent feuding between the Killers and the Bravery (here and here) who are (oddly enough) handled by the same management and P.R. folks. Throughout the interview Flowers was soft-spoken, but he raised his tone and lashed out as soon as I asked him about singer Sam Endicott of the Bravery.

In a fun quick word association at the end of the interview I mentioned "Sam Endicott," and Flowers promptly responded with "wanna be." I guess he couldn't put it any other way.

Some bits from the interview regarding the feud with the Bravery:

"It is one of those things that happen. Basically what happened was that when they were compared to us in an interview, they seemed offended. And that offended me, because we have helped to open doors for bands like them. I'm very grateful for bands like the Strokes and the White Stripes because I feel they opened doors for us. And so I would never put them down in any way or be offended that these bands were before us. Honestly, I think it is quite rude that [the Bravery] was offended when they were compared to us."

"When we moved into a bus, we sold [the Bravery] our tour van, and a lot of the people that we made friendships with and people like our agents and press/promotional people are the same people that are their agents and press people so we kind of cultivated this road for them and it doesn't seem they appreciate that."

"I don't think it is a publicity stunt really. It sort of started with something I said. To be honest, a lot of this whole things bothers me. They should just be happy that we were around. In the end, we are also very different and I don't get the comparisons either. I just don't try to get too upset about it."

Check out the June issue of GENRE for my entire interview with Brandon. The singer talks openly about the gay rumors, gay fans, the new album ("more organic" and slated for early 2006) and a pregnant Britney Spears.