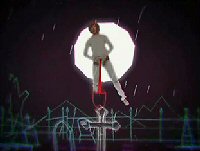 Shynola earlier worked on productions for Junior Senior, UNKLE and Radiohead. The England-based collective has built a reputation for their animated music videos that are different than the usual MTV edits, fade-outs and slow motion effects. As Josh points out, it is mostly their "weird illustrations" that leave a lasting impression.

In an interview with the BBC, the group explains their preference for animations. "Technically speaking, we aren't particularly good animators. Animation was a way into the industry, it allowed us to make pop videos on computers. We were on a very tight budget - the computer I used to make our first couple of videos came from a supermarket."