arjanwrites.com: Interview with Sam Endicott of The Bravery (Part 1)

Interview with Sam Endicott of The Bravery (Part 1) 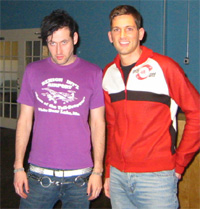 The Bravery is being hailed by critics and music fans as one of the most promising new bands of 2005. The New York quintet is currently on the road to promote their forthcoming self-titled debut album. If you want to get a taste of the Bravery, stream their album here or download an EP from iTunes.

I met up with the Bravery's lead singer Sam Endicott during the soundcheck for their gig in Atlanta last Saturday. Friendly and articulate, the artist spoke openly about the inspiration behind the album, the spirit of rock and roll, using eyeliner and the comparison with Duran Duran.

In Part 2 of the interview, he will speak more about the rivalry with the Killers, gay fans and the hype surrounding the band.

How do you feel about the comparisons with Duran Duran and New Order?
No artist likes to be compared to others. You always think you're special and unique and all that bullshit. But at least they are comparing us to good bands instead of shitty ones. The Duran Duran comparison is my least favorite, because I don't like that band at all. It is just human nature that when you hear something  to compare it. There are things that we have in common, but we take our influences from a lot of different things.

Many describe the Bravery in terms of the looks, the haircuts and the eyeliner. Does that bother you?
Our album is not out yet, so people have only a couple of songs to listen to and a zillion of pictures to look at. So that's why they comment on that. It is funny because I never expected it would be that way. We never saw ourselves as some sort of glamour band. We're all about spending a lot of time on the music and trying to make the songs as good as they can get. There's nothing wrong with having style as long as there is substance too.

Was there a particular feeling or emotion that you wanted to convey on this album?
We didn't set out to create a certain theme or message. The way we recorded is that we basically put the album together when we had enough songs laying around. As far as writing the songs, I just write about whatever is going on in my life. Looking back at it, there are a few pre-dominant themes that also reflect some of the things that I personally went through. But I didn't plan it that way. It was nothing intentional.

Besides being a lead vocalist, guitarist and songwriter, why did you decide to also be a producer?
I'm all about doing things yourself. You can hire somebody to produce who is fast and technically very proficient, but we think about this band every minute of the day. Nobody else is gonna do that. Nobody else is gonna get it. I just don't think it makes sense to use anybody else. Yeah, I can do it myself and make a mess, but I think there's a beauty in that mess. Now, we come up with something that is messy and that is great.

How did you get to the point of incorporating electronic touches in your  music?
John [the keyboard player] and I went to school together and have known each other for a very long time. He really turned me on to keyboards. I started thinking how cool it would be to create a band that could take it back to the original spirit of rock and roll, which is about getting people together, shaking it up and bringing some energy into your life. I want people to come to our shows and leave with more energy by injecting passion into them. So how do you bring it back to that feeling in way that has not been done already? There answer is in electronic music. There is this whole world of synthetic sounds out right now that are so cheap that you can just throw it into your garage with your guitars and drums. Then, with your shitty iMac you got this whole new world of sounds. I like to think of it as the future of garage rock.

Is it true the post 9-11 feelings of angst and anxiety has influenced you?
In a way. I write a lot about anxiety and the fear of the unknown in my life. I always have that sense of sitting around waiting for something bad to happen. During that time [right after 9-11] that fear was really heightened. The whole whole country had that sense of anxiety, and still does I think. That whole experience brought it all to head and made me think about things. I realized how much fear and anxiety influenced my life and how it was holding me back from doing things. There was a point that I was like "fuck it"  - I'm just gonna eat my fears up and do what I wanna do and hope it works out for the best. Music has made me a lot happier.

The album conveys that well with image of a phoenix?
Yeah, that was done by a good friend of ours. Her name is Finney and she's has known us from the beginning and has done all our CD covers and shirts. She's awesome as shit.

Continue reading Part 2 of the interview with Sam