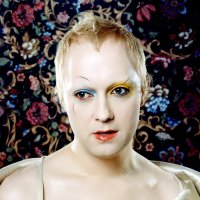 Antony doesn't mind sharing some of his most personal feelings with his friends. That's what they are for after all. Boy George, Lou Reed, Devendra Banhart and Rufus Wainwright collaborated with the New York singer to complete his new album "I'm A Bird Now."

"It is really paradox that there are so many voices on the record and yet the materials on the record emerged from such a personal source," Antony says. "There was a time that I didn’t think I would finish the record and then all these other people showed up and helped me."

With Peter Hujar's famous photo of transwoman Candy Darling on its sleeve, "I'm A Bird Now" blurs the line between genders and generations to create an intimate body of work that is truly unique. With the clarity of a child Antony paints a complex picture of his innermost emotions that point to his own transformation as a human being.

"Obviously my work is very personal. It is not veiled, it is not a construct," he explains. "I pretty much wear my heart on my sleeve. My voice is pretty much the way I think."

It comes as no surprise that many are puzzled by Antony's androgynous appearance and vocals. His emotive piano tunes and out of this world vocals invoke memories of Nina Simone and even Otis Redding. He's still surprised to hear that people make these comparisons. "That's funny because I don’t think about my voice like that anymore," he says. "For the longest time I thought Alison Moyet from Yazoo was a boy and when I found out it was a girl I was blown away."

The singer first came to New York City in the early nineties when he was 19 years old. After living in Europe ("After Amsterdam I permanently changed") and California, he eventually settled in the Big Apple. "I was looking for things that I identified with. I was just trying to find a culture that I belonged to," he says. "What is funny about New York is that when you get here, you realize that you bring like minded people with you. You arrive with your peers from all their little chicken villages. New York is really a place where you end up making your own world."

The multi-talented artist quickly became part of the city's avant-garde art scene while performing in the after-hours Blacklips cabaret at the East Village's Pyramid Club. He assembled his band The Johnsons to record his first album and soon started to perform at The Kitchen and Knitting Factory that led to a residency at Joe's Pub at the Public Theater.

Surrounded by a Warhol-like clique, Antony developed an interest in underground gay culture as a way to express himself. "I have always been drawn to the marginal sub-culture. That strain of transvestism in underground art has been one of my fascinations. I ended up in the Pyramid Club pretty quickly when I first arrived and met the entire colorful hybrid that only lives in New York."

Antony laughs at the notion that some listeners have trouble deciphering his age and gender. "If they saw me up close they would know exactly how old I was," he smiles. "Some people might respond more to the images in my work than who I am as a human being on the street."

Duetting with his idol Boy George on the haunting "You're My Sister" was a dream come true for Antony. He wrote the song for his sister but its meaning can be applied to all kinds of different relationships, including his friendship with the '80s pop star.

After singing on Rufus Wainwright’s "Want Two," the Canadian crooner sings lead vocals on Antony's track "What Can I Do." "He did the song as a guest performance during one of my shows," Antony says. "I was so struck by his rendition of it, and I thought he should just do the whole thing for my record."

Antony bridges the gap to the older generation of eclectic musicmakers by collaborating with pal Lou Reed on "Fistful Of Love."

Besides music, Antony also has a passion for visual art, including photography, that he incorporated on "I'm A Bird Now." The album cover includes the famous 1974 photo of Andy Warhol star Candy Darling by Peter Hujar,  It is a picture of [Candy Darling] right before she died in Cabrini hospital," Antony explains. "Hujar's picture of Candy Darling is one of his most famous pictures, and I was very fortunate to get permission to use it."

"I also included a photo of Paige [on the album sleeve]. She also died in Cabrini hospital and she was like the Candy Darling of my generation. She was also a very enigmatic, transsexual artist," he adds.

Rufus Wainwright was happy to make a contribution to Antony's record. "I believe Antony is the greatest singer of all time," he says in a recent interview with the arjanwrites.com music blog. Antony laughs when he hears about his friend's compliment. "He's crazy," he laughs.