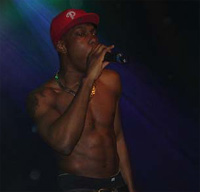 Dizzee is a stud! The British rapper performed in Vancouver last night. Check out more photos from the performance at From Blown Speakers. In the meantime, check out his video for "Stand Up Tall" that was filmed in Atlanta. It is one of those rare tracks that make me enjoy rap music with its  funky beat, witty lyrics and Dizzee's idiosyncratic delivery. 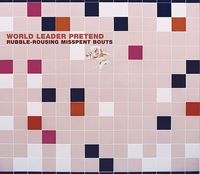 Fantasticallyfunnysuperblogger Toby shows off his diverse musical taste this week by writing about Ashlee Simpson, Garbage and now World Leader Pretend, one of his favorite new indie bands. Check out the group's "Rubble-rousing Misspent Bouts" EP on iTunes. The New Orleans-based WLP combines their Cajun jam roots with spicy melodic hooks and the singer's emotive vocals.

I have been thinking about asking Toby to be a guestwriter on arjanwrites.com and interview Shirley Manson with me. What do you think, Toby?  I know you're a fan.

While the Killers are getting sued, let's enjoy an early demo version of "Replaceable"  This track was probably intended as a B-side and never made the cut for "Hot Fuss." In an interview with MTV, singer Brandon Flowers shows off his pissy side by not only criticizing his band's new video but also the Bravery.

"Look at a band like the Bravery. They're signed because we're a band," Flowers said. "I've heard rumors about [members of] that band being in a different kind of band, and how do you defend that? If you say, 'My heart really belongs to what I'm doing now,' but you used to be in a ska band. I can see the Strokes play or Franz Ferdinand play and it's real, and I haven't gotten that from the Bravery. I think people will see through them."

Listen to the Killers' "Replaceable" [MP3] 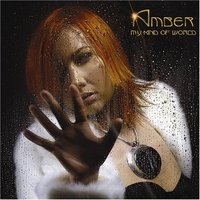 (Exclusive) Check out the Ugly Doll Remix of Amber's new single "Voodoo." Radio and club promotion of the remix single will kick off in April. This is the second track taken from Amber's self-released album "My Kind Of World." This remix is nice slice of pulsating house with Amber's impressive vocals. She's still the diva. Give it a spin. Also check out Amber's website for much more info on the singer.

Y'all keeping my download server busy. If the link above times out, try it here:

While we're on the topic of Fischerspooner, check out this exclusive Rock Remix of "Just Let Go." Sounds like a combination of Greenday and Audioslave to me. Clearly, Capitol is gearing up to roll out FS to alt-rock radio. Now how's that for a muscial cross-over? (Thanks for sharing Andrew!)