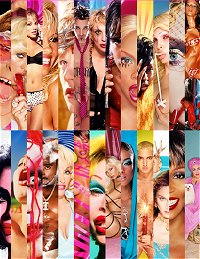 David LaChapelle will be showing off some if his famous celebrity photography at Deitch (18 Wooster Street, New York: Google Map) from March 12 to April 16 during the "Artists & Prostitutes" exhibit. Check out the flyer for the opening here and consider yourself invited. Who knows what celebs you might run into.

The exhibit 3 oversized L.E.D. projection screens (15 feet x15 feet) featuring a collection of images taken throughout LaChapelle's illustrious career. He has also designed a life-sized set in the gallery allowing visitors to freely experience a slice of "LaChapelle's world."

LaChapelle is considered one of the most creative celebrity  photographers who has photographed some of the biggest celebrities and personalities in the worlds of music, entertainment, fashion and art. His work has been featured on numerous magazine covers around the world. In addition to still photography, LaChapelle has directed music videos for pop music stars such as Jennifer Lopez, Britney Spears, Whitney Houston and numerous others.