« Video Premiere: The Killers "Smile Like You Mean It" | Main | FS Release Parties » 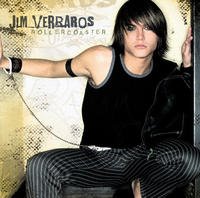 After escaping from "American Idol" captivity, Jim Verranos breaks loose with a new sound and image on his upcoming album "Rollercoaster." The gay singer was on the first season of "American Idol" and the very first person voted out of the top ten. After the tame self-released "Unsaid & Understood," Verraros went on to win the 2004 Out Music Award for Outstanding Debut . In the same year, Verarros also made his movie debut playing Kyle in independent film Eating Out, directed by Sundance Film Festival winner Q. Allan Brocka. There is life after "American Idol" after all (keep hoping Ruben!).

"Rollercoaster" is said to include "well-crafted, pop gems similar to the recent work of Justin Timberlake. Verraros' voice would have you mistake him at times for a young George Michael." Noteworthy is that Angela Peel, another "American Idol" finalist in season one, co-wrote four of the album's 11 track.