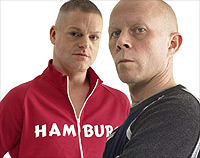 Erasure is back in the spotlight with their first studio album in seven years. On "Nightbird," the British duo has returned to the impeccable pop sounds that made them sell over 25 million records in the late '80s and early '90s. Andy Bell's choir boy vocals wrapped around Vince Bell's hooky synth melodies has produced one of the best albums of their career.

Bell made headlines late 2004 when he firmly put an end to rumors and disclosed on the group's web site that he is HIV positive. Currently, Erasure is preparing a lengthy North American tour with stops in major cities. Time to catch up with Andy Bell, 40, to learn more about all that's new with Erasure and Andy's personal life.

You've said that "Nightbird" is one of the best records Erasure has ever released. Isn't every last record you put out your best?
It all has to do with timing. Looking back, I wasn't very happy with some of our previous records. "Love Boat" was too experimental and "Other People's Songs" was a collection of covers. We were really ready to write fresh material. And I am very pleased with how things turned out. Something just feels right about the songs, I have no doubt about it at all. Everything seems to have fallen into place. I sorta have to pinch myself to believe it.

This is a very romantic album…
Aw. Thanks.

What is your idea of romance?
Romance can be many things to me. Walking hand in hand, a nice walk through the woods. Or just a romantic evening at home playing choral music or something classical. My boyfriend and I are really enjoying the orchestral version of Jodi Mitchell's "Both Sides Now."

Would you ever play an Erasure song to get into a romantic mood?
[Laughs] Not really.

Is it true "Nightbird" refers to your insomnia?
Yes, I have a hard time sleeping at times. I always have to think about what to do the next day and I have a hard time falling asleep. For example, I was performing at an AIDS benefit in Germany and I kept on thinking about what I was going to say in between songs. It is little things like that that keep me up.

The album title reflects the nocturnal feel of the songs very well...
Yeah, I agree. I play the album on my iPod and I love to play it on the plane because it puts me to sleep. Not because it is boring, but it is soothing.

Are you a night person?
I have always been a night person. As a performer that is very convenient because most of our work is at night. But when I was in school as a teenager I usually stayed up until 3 in the morning to listen to the radio. As a result, I was always late for school, which became a running joke.

In the lyrics on "Nightbird" you almost always sing to an imaginary lover. Are your lyrics fictional?
They are all fictional. Sometimes I don’t even know what they are about but then a year later or so they start to make sense. But it also happens that I write the lyrics and act them out at home with my boyfriend. It is a weird thing. They tend to become autobiographical.

In your lyrics you often ask a lot of patience from your lover. Are you a high maintenance boyfriend?
I would say my boyfriend is high-maintenance [laughs]. But with all the touring and being away from home I do like to be waited on when I am home. I know that sounds quite bad, but I love to get a cup of tea in the morning in bed.

How long have you been with your boyfriend?
20 years.

So what is your secret to a long and healthy relationship?
That's a bit personal, but no sex has been our secret. Sounds very strange I know.

I heard rumors you are working on a solo album?
Yeah, that's true. Eighteen songs are done. It will be called "Manhattan Clique." That's the name of the guys I'm working with and I thought that would be a good name. It will come out at the end of this year or early 2006. It is all very dancy and clubby, and also has a couple of Northern soul songs. I'm hoping to include a duet with Jake Shears from Scissor Sisters and one of the girls of the B52s.

You recently announced to fans that you are HIV positive. How was it to share something so personal publicly?
It is a complicated story. My boyfriend found out he was HIV positive in1990 when he was forty years old. He was going to have a face lift and when he did a blood test for that, he found out. He then said that he didn’t want to have sex with me ever again because he didn't want to infect me. I basically said, "Well, if you don’t wanna sleep with me, I will go somewhere else to get it." In the meantime, somebody had stolen my jacket in a nightclub. [This person] was arrested when he started to use my credit card. The police came to my house and asked if I wanted to press charges. They also mentioned he had AIDS. I told them to drop the case. However, that guy called some of the tabloids telling them he was my boyfriend and that I had given him AIDS. He completely made that up of course. Around that time I had my appendix taken out and I got a blood test and tested negative. My boyfriend took a certificate from my doctor to tell the newspapers the rumors were false. So when I found out [in 1998] that I was positive I didn't want to cause another [media frenzy]. But late last year, rumors started floating on the Erasure message board and I thought it was a good time to put my cards on the table.

Your health concerns don't seem to have influenced this new record. There is not much sadness or pain on this album.
That's because I feel good. I think in the end it does influence me. Even happiness comes from hurt. I tapped into that pathos when making this new album.

The younger generation of gay guys appears to be more complacent about the HIV virus. What are your thoughts about that?
I think you're right. There's a lot of new sex clubs in London and people just let go, especially younger guys. They think HIV is like having the flu. But it is much worse than that. Your immune system is compromised and the smallest thing can really have a big effect on you. But that is not stressed enough. There seems to some sort of sexual revolution going on with even straight guys sleeping with gay boys. And married men. They're probably the worst.

Did you dramatically change your lifestyle after you found out you were HIV positive?
Not really. Not for a while. After my boyfriend had a stroke in 2000, I still did cocaine and stuff like that afterwards. When I had my two hips replaced last year, I decided that I had enough of all that and just be who I am. When you are HIV positive it is like you belong to some special group in some ways and there's a lot of peer pressure. I had enough of that and now it is just me.

You're preparing for a big North American tour. Are you looking forward to it?
Definitely. We are going to lots of songs from the new album and also a cover of Blondie's "Rapture." It will be a lot of fun.