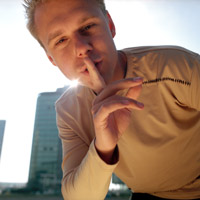 Trance music has become a global phenomenon with followers all around the world. If you look at the dazzling tour schedule of trance DJs, you'll find that many of them often hit three different continents in one week to spin their tunes in front of cheering crowds. Trance has indeed become a universal religion and DJs are spinning its gospel.

The Netherlands is the breeding ground for the current generation of popular trance DJs including Tiesto, Ferry Corsten, Sander Kleinenberg and Armin van Buuren. DJ Magazine recently ranked Armin #3 in their annual chart of best DJs. Tiesto was voted number one.

Fans of atmospheric trance should check out Armin van Buuren's latest CD "Universal Religion 2004." The CD is a live recording of Van Buuren's performance at Club Armada in Ibiza this summer. He has put together an excellent collection of recent trance hits that he played during his gig at the party island.  With its climactic beats and mind-altering strings, the CD successfully conveys the sunny and breezy Balearic feel of this island. Amen, Armin.

Sample some tracks from "Universal Religion" by Armin van Buuren