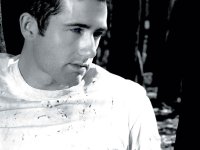 Check out emerging gay singer/songwriter Sasha Sacket who recently released his second album "Shadowed." He is currently touring around the country to promote the record.

The Los Angeles native was introduced to the entertainment industry at a young age. First hitting the stage at age six as a spunky Mickey Mouse, his career as a performer took shape through years of coffeehouse piano performances and local theatrical productions. He further tuned his musical skills as a film and theater major at the University of Southern California.

In 2001, he released his debut album "Alabaster Flesh" that was nominated for best album in the Out Music Awards and charted at #1 on the Out Voice Top 40 charts. Now, he is preparing a Spring tour schedule that includes performances at colleges, GLBT Groups and festivals across the nation. He will also appear at various Pride celebrations in the U.S. this summer.

"Shadowed" solidifies Sacket's reputation as a gifted singer/songwriter. His songs deliver a story, an observation or simply an emotion that the emphatic Sacket puts into music. The basis for most of the tracks is a simple piano-driven tune, but the album includes several pop-savvy production tricks that give this album a very contemporary feel. Add to the mix Sacket's pitch-perfect vocals and what you have is bona fide hit record. You can stream the entire album on Sacha's web site.