An Evening with Tori Amos

Tori Amos will make a special appearance at the 92nd Street Y in Manhattan on February 24 to discuss her career, her new album and the topic of women in music. This special forum interview will be moderated by Ann Powers, senior curator for the Experience Music Project in Seattle, and former music critic for The New York Times and The Village Voice. Amos and Powers are co-authors of the new book "Tori Amos, Piece by Piece." Tickets for the event will go on sale soon.  Amos' forthcoming album "The Beekeeper" will be released on February 22.

Meanwhile, more tracks from the new album are appearing online:

Listen to "Sweet the Sting" from Tori's new album "The Beekeeper"

Ernest Kohl's cover of the 1980 hit "Only You" by Yazoo entered the Billboard Dance chart last week. This is the second version of Kohl's rendition of the '80s classic. He earlier scored a hit with it in 1995. This new outing by the New Yorker is formally called "Only You - 2005" and is produced by Majic Music UK and Steve Skinner.

This cover is a decent trance-house track that features Kohl's theatrical vocals (think ABC's Martin Fry). But nothing beats the original by Yazoo. I can still hear Alison Moyet blaring out those lyrics.

The remixes for this updated dance stomper were done by Chris "The Greek" Panaghi, Robert Oleysyck, Julian Marsh, Stephen L. Freeman and Mike Coppock and Tony Spalding for Majic Music UK(Almighty).  (Click here to buy the mixes at Amazon.) 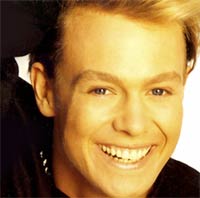 Especially for you: Jason Donovan performs at PWLradio's
launch party tonight at G.A.Y.

Does anybody remember '80s hit producers Stock, Aiken and Waterman? They launched the careers of numerous pop artists including Kylie Minogue, Jason Donovan and Dead or Alive. After their heydays, Pete Waterman went on to create his own music and production company Pete Waterman Ltd.

Now, the British pop mogul has launched PWLradio.com, the internet's first pop/dance radio station playing the greatest pop and dance music from the '80s, '90s and '00s, 24 hours-a-day, with no DJs, together with first plays of upfront new hits. Shows include "Popcorn," "80s Gold," "I Love My Radio - Requests" and "The Hit Factory."

If you're in London tonight, make sure to check out PWLradio's launch party at G.A.Y. with live performances by Jason Donovan, Hazell Dean, Sonia and Sybil. The party at this gay dance mecca will be broadcasted live on the internet radio station.

On a related note, Jason Donovan (who received £200,000 worth of damages after sueing a magazine which accused him of being gay) is rumored to join Kylie Minogue on her 2005 "Showgirl" tour where they will perform their hit "Especially For You".

Nerdtech is raving about the new Daft Punk album "Human After All" and points to two brand-new tracks.

"Human After All" by Daft Punk