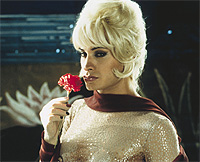 "La Mala Educacion" ("Bad Education") is director Pedro Almodóvar's latest cinematic masterpiece that features a breathtaking performance by Mexican actor Gael Garcia Bernal. This film noir tells the story about two kids who discover sex, cinema and fear at a Catholic high school at the start of the ‘60s. Father Manolo, the school principal and their literature teacher, is witness to and part of these discoveries. The three characters meet twice again, at the end of the ‘70s and in the ‘80s. The re–encounter will mark the life and death of some of them.

Almodóvar once again explores taboo topics in this gay-themed movie including sexual abuse, gender confusion, pedophile priests and homosexuality in the Catholic Church. "Bad Education" establishes Gael Garcia Bernal as a bona fide sex symbol. The director has an eye for capturing his raw beauty. He films Bernal swimming in his white jockey briefs (and zooming in on his crotch) and showing him excercising shirtless in skimpy gym shorts.

The movie is also an ode to the legendary Spanish singer and gay icon Sara Montiel who makes a cameo in the movie. The diva has been called Spain's answer to Judy Garland via Mae West. Montiel is the main inspiration for the movie's main drag character Zahara who is played by Bernal. The sultry Zahara performs Montiel's "Quizás, Quizás, Quizás" dressed in a glamorous Jean Paul Gautier dress.

The song is featured on the "Bad Education" soundtrack that was put together by Alberto Iglesias. In addition to his original score, the evocative soundtrack recording also includes vintage European pop songs from the 1960s such as "Maniquí Parisien," also sung by Sara Montiel, and "Cuore Matto," sung by Little Tony – as well as performances of "Moon River " and the Italian song  "Torna a Surriento," and an excerpt from Rossini ’s Petite Messe Solonelle.