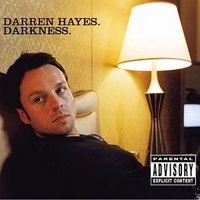 Rumors about Darren Hayes' sexuality continue to flare. JD in London wrote me that he saw Hayes and a male companion being "intimate" on the tube recently...

Meanwhile, the ex Savage Garden singer has released the second single of his solo album "The Tension & The Spark." "Darkness" is a moody and introspective track that is "the introduction to the subject matter that is the central theme of my new album," Hayes says in a press statement. "Here I am in darkness...at zero, at my lowest point and yet still I'm searching for hope in the darkness."

Some say that this song is about Hayes' struggle with chronic depression while others argue that he finally opens up about his life as a closeted queer. The song's ambiguous lyrics might point to either one of these interpretations. But with trivial statements like "Been spending so much time underground/I guess my eyes adjusted to the lack of light," it is hard to say if he is really showing his true (pink) colors. Hayes most definitely fuels more innuendo by keeping it vague.

Interesting detail is that Hayes recorded the vocals for the entire album including this song inside a closet to create the right amount of angst and anxiety for the album.