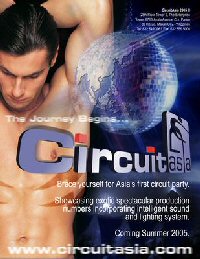 The gay circuit scene extends beyond America and Europe as The Philippines prepares the debut of Circuit Asia. The dance extravaganza will run from April 28 to May 1, 2005 in Manila. Special travel packages (including air, hotel and party tickets) start at $998 for travelers from the United States.

Ding Pastrana, the founding President of the event promises a "groundbreaking experience." "We are bringing a different caliber of partying to the Far East with a state of the art sound and light system and most importantly, the world's most beautiful and exotic men," Pastrana says in a press release. "Over the long term, we intend Circuit Asia to be among the must-go gay destination events in Asia alongside Montreal Black and Blue and Palm Spring's White Party, our foremothers in the circuit scene."

Manila will be hosting DJs Kimberly S, Brett Henrichsen and Gomi. No details were provided about possible Tsunami benefit activities during the event. Circuit Asia is a major supporter of the Gift Foundation and supports the foundation's program on AIDS.

Get in the mood for the circuit: