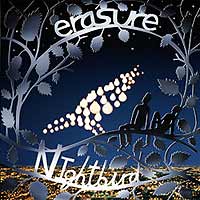 Yesterday, I received an exclusive studio cut of Erasure's forthcoming album "Nightbird." The group's twelfth studio record is scheduled to hit stores on January 25th and will be introduced by the single "Breathe" on January 18th. The single CD will also include club mixes from Manhattan Clique and Pete Heller.

Fans of the band will be pleased to learn that Vince Clarke and Andy Bell have returned to the impeccable pop sounds that made them sell over 25 million records in the late '80s and early '90s. Erasure built a reputation as synth pop pioneers by injecting their signature electro beats with warmth and catchy melodies.

After their greatest hits compilation CD/DVD "The Very Best of Erasure" and the cover album "Other People's Songs" in 2003, the duo went back into the studio to write new material (their first attempt in seven years).

"Nightbird" sounds decidedly upbeat and reflects the current state of mind of the band. "The last couple of albums were a bit moody and down," says Bell in a press statement. "I'm so much happier with everything now and so is Vince. You can hear it in the music.  This is easily the best thing we've done for a long time."

The title "Nightbird" refers to Bell's insomnia and nicely sums up the overall low-pulse, nocturnal feel of the album.

This new CD lacks any flashy or memorable stand-out tracks. There are no songs with the melodic kick of classics like "Oh L'Amour" or "Sometimes" that previously made Erasure's music instantly infectious.

This doesn't mean that this album is a total flop. The combination of Clarke's nifty synth wizardry and Bell's choir boy vocals make new songs like "Breathe," "No Doubt" and "I'll Be There" worthy contenders in the duo's extensive portfolio of theatrical electro pop.

Clarke works in some atmospheric trip hop, '80s retro and downbeat dance grooves but there's nothing on "Nightbird" that moves the electronica genre forward like the band did on earlier records.

Clarke and Bell stay within their comfort zone, which makes "Nightbird" an album for fans more than anything else.