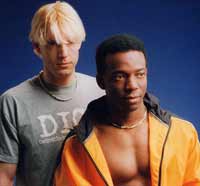 Justus Boyz are longtime companions Phil & Mike Boila-Elam. The savvy Detroit couple has developed a unique lifestyle concept that includes both male fashion and music. You might have seen their sexy ads throughout the blogsphere.

Released in 2003, their self-produced and written album "Uh Oh" is regaining momentum due to internet radio play, blog exposure and the increasing popularity of their clothing. According to the Boyz, the program director of Live365 radio has been "hounding" them for new material after over 4,400 spins of their current hits. "Internet radio has been a great way for us to get exposure around the world," says Mike.

It was announced that their music will included in the upcoming gay-themed movie "Eighteen." The music supervisor for the Richard Bell movie did not only add "Callin' All The Boys" to the soundtrack but also the dance instrumental, "Go Get My Money."

Phil & Mike's mission is simple. "Our idea is to create an environment that is inclusive of all people regardless of age, race, orientation or religion," explains Phil. "That is what has been so cool about what we do. Different people from all over the world are listening to our music and wearing our clothes." 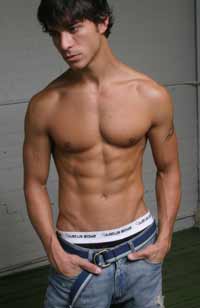 Combining fashion and music was something that came very naturally to Justus Boyz. "We saw the entire concept in an instant," explains Phil. Mike adds, "It is all about an image and how you feel. Both music and fashion is an expression of yourself. You can say that the fashion has become an extension of our music (. . .) You have to reach in to reach out."

Their creative journey is a very intuitive process for the duo. "[In both music and fashion] we ask ourselves what it would take for us to get excited about something and then we take it from there," says Phil. "For our fashion, we set out to create that comfortable piece of clothing that you always like to wear."

The two have been together for seventeen years. They don't want to disclose their age, but Phil quips that Mike first cruised him "in the sandbox." Being in a personal and business relationship is working well from them. "It has been a learning curve. In every relationship you grow," says Phil. "As long as you respect each other, it makes it all a lot easier."

"Making music with another person is not easy. You really have to get into another zone with someone," says Mike. "We were butting heads a lot early on because we're both strong-minded individuals. We both evolved into the same direction and things worked out very well."