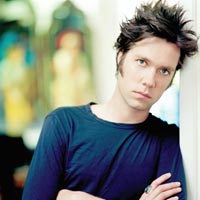 Singer/songwriter Rufus Wainwright is not afraid to speak his mind. In a time of increasing conservative sentiments in American society, Wainwright' newest CD/DVD "Want Two" (out on November 16) tackles some controversial issues head on, including the much-debated struggle for gay rights.

But "Want Two" is by no means a political record. Wainwright's fourth album features the singer's signature melancholic storytelling and operatic melodies that portray the world according to Wainwright.

The record reflects his fascination with classical music ("Little Sister") and spirituality ("Agnus Dei"), his struggle to understand the world we live in ("Waiting For A Dream") and an emotional ode to the late musician Jeff Buckley ("Memphis Skyline").

He also invited friends and family to take part on the recording, which makes "Want One" one his most personal efforts to date. Emerging artist Antony makes a cameo on "Old Whore's Diet" and his mother and sister perform on "Hometown Waltz."

If you are not familiar with Rufus Wainwright, check out a special Geffen media player with songs and videos from his new album.

Arjan: Congratulations with the release of your new album. Your songwriting turns out to be particularly relevant with regards to the current state of the world.

Rufus: Yeah, it is a pretty apocalyptic time. And I have to say there are not many artists out there that are willing to speak about it. All these pop stars still think it is 1999.

You're also one of the few artists that is publicly standing up for gay rights, most notably on the protest song "Gay Messiah."

Yeah, I think that is very important. Actually that song started out as a joke. Just a song to have some fun with. But when Bush started to talk about a constitutional amendment to ban gay marriage and Mel Gibson's "The Passion Of The Christ" came out, it took a heavy turn. Now, the song is more a reality call and damnation. It is a realist prayer you can say.

There is a lot of gays in the United States that are considering moving. The Canadian embassy has been flooded with visa requests.

Yeah, thank god I still have an apartment in Montreal. I'd be more than happy to sponsor a cute boy to help out [laughs]

Do you think gays here should stay and fight or is it really just better to leave?

That's a good question. If you think about it, I feel that it is part of a bigger issue. It all has to do with modern-day American imperialism. I think it is more valiant for people to stay and to try to change the government. What I'm trying to say is that it might not be possible to run away from the problem, because American influence is everywhere and these anti-gay sentiments might spread around the world.

I found it interesting that on the song "Agnus Dei" you combine Catholic liturgy with a Middle Eastern vibe. Why did you combine these two very different cultural elements?

That sort of happened. I didn't plan it like that. I just like to say that I don't belong to any church or religion, but I do feel I'm one of God's children. I'm a spiritual human being and I find some of the religious ideals and elements very meaningful. It is the mystical elements that I find very interesting. In fact, I try to take a page out of the book of the religious right.

How was it to include Middle Eastern elements?

I'm very inspired by Middle Eastern music. Egyptian singer Oum Kalsoum is one of my all-time favorite singers and it was great to include that flavor. I guess if I have to explain it I can say that I like the naturalistic feel of Middle Eastern music with the [explicit] lyrics of Western music.

You are portrayed as the Lady of Shallot on the cover of "Want Two." Why did you choose that metaphor?

I look great don't I? [both laugh]. Initially, I wanted to be some sort of sleeping beauty. A friend of mine explained the entire Lady of the Shallot story and I found it very appropriate. There are some similarities with sleeping beauty actually. Both are awoken by a prince. But Lady of Shallot is raped by Prince Lancelot and then sings herself to death.

So it is the melancholy of the story that appealed to you?

Yes, it reflects the feel of the album well. For example the song "Memphis Skyline" is about Jeff Buckley who drowned himself. He was also like a Lady of The Shallot.

The song "Old Whore's Diet" is one of the most striking songs on the record.

Thanks, I wrote it as an ode to decadence.

The song features singer Antony [who was recently covered on arjanwrites.com] and you also sing lead vocals on the song "What Can I Do" on his upcoming album. How did that collaboration come about?

Antony is a very good friend of fine and quite frankly I think he is the greatest singer in history. He's a member of the New York underground art scene and totally dedicated to that. He knows all the artists and musicians that are part of that. I'm very happy to give him the attention he deserves.

Previously you've said that you are pissed off with the state of contemporary gay culture. Do you think there are enough gay role models out there that represent the many aspects of our culture?

Absolutely not. Gay culture has a very lax attitude about partying quite frankly. I know that is an essential part of gay life and I've lived that life. But there is more than parties, going to the gym and sex. Yeah, sure it is liberating and it is fun, but in the end it is damaging to people and the community as a whole. I think there is simply not enough alternatives to enjoy gay culture and that's a shame because there is so much gay art to enjoy.

Well, you offer an alternative.

It is interesting you mention that. I think so too, but it has been an uphill battle. Magazines like Rolling Stone covered me before gay magazines did. It is changing now because I'm becoming more famous, but it has been hard to find recognition for my music in the gay community.

What is in your CD player right now?

You like to listen to your own music after it is done? Some artist prefer not to.

Oh but I do. I'm actually listening to it now, because I want to come up with some ideas for a video. I'd love to do a video for this album. I want to make it like a spaghetti western. I think I look really good right now.

The hair is flawless.

[both laugh] We have to get it on film before beauty fades.