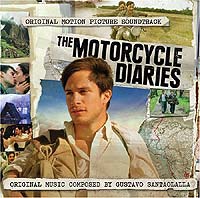 "The Motorcycle Diaries" is an inspiring new movie by director Walter Sallas based on the true story about a motorcycle trip 23-year-old Che Guevara made with his friend Alberto Granadado in the early '50s. The two friends traveled from their home in Argentina 8,000 miles in eight months all the way across South America.

The experiences Guavara had during his journey put him in touch with different sides of humanity, which inspired him to stand up against the establishment and change the world. More than fifty years later, he has become one of the most iconic revolutionaries in South American history, who has changed the course of nations.

You might be familiar with Guevara's famous beret portrait that is printed on t-shirts, stickers and flags. Even Madonna took a cue from this image for the sleeve art for "American Life."

Besides the movie's outstanding cinematic achievement, one of the main attractions of the flick must be the very sexy Gael García Bernal. The New Yorker's Anthony Lane put it well when he wrote in his movie review that "Bernal is so preposterously beautiful that all his movies tend, at a certain point, to stop whatever they're supposed to be doing and gawk."

The original soundtrack for "The Motorcycle Diaries" was written and performed by composer Gustavo Santaolalla who has been called the guru of Latin alternative musical production. The Argentine previously wrote the scores for "Amores Perros" and "21 Grams."

But Santaolalla is mostly known for his success as a music producer. He won a Latin Grammy for Café Tacuba's "Revés/Yosoy" (Best Rock Album of 2000) and has been a long-time collaborator of Latin music sensation Juanes.

Santaolalla's affinity with rock music gives "The Motorcycle Diaries" soundtrack a very modern-day feel. This is at first a bit odd because this story is set in 1952, but the musical bridge to this day and age is appropriate given the influence Guevara's leftist ideology still has today.

You don't have to have seen the movie to enjoy this soundtrack. The album is as diverse and provoking as the landscapes Guevara and Granadado traveled on their journey through South America.