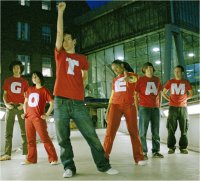 Some music inspires you to think outside of the box and take a fresh look at things. The Go! Team's "Thunder, Lightning, Strike" is one of those novel sonic experiences. In fact, the Go! Team should be mandatory listening for all stressed out business professionals who are looking to discover melody in chaos.

The group's genre-crossing cacophony of flutes, breaks, rap, synths and Motown inspired samples on songs like "Get It Together"[MP3 sample], "The Power Is On" [MP3 sample] and "Junior Kickstart" [MP3 sample] force you to sit down and listen. But only for a minute. After that you can't help to stand up and groove to the band's infectious beats.

A small cult following has already discovered the savvy sounds of Silke (drums), Chi (drums), Ian (harmonica), Sam (synths), Jamie (bass) and Ninja (MC/DJ) through word-of-mouth and some recent performances in the U.K.

Theinternational group of freestylers (who still have their regular day jobs) is looking forward to perform at Austin's South by Southwest music festival in 2005 to gain recognition with a larger American audience.

Bandleader Ian Parton spoke with arjanwrites.com about the beginnings of the band, his fascination with sounds, the recording of the album and making music for McDonald's commercials.

First things first. How did the Go! Team come about?

In my bedroom really. I had a bunch of crappy '80s sound equipment and an Atari, and I started putting some of my ideas in practice. The idea of putting different samples next to each other - trying to make a new song by putting a range of different types of music next to each other. So it started off with me and then I hooked up with five other people in London and Brighton. Two of them are friends, the singer I met at an open mic night and the drummer I met at a record shop.

Why did you pick these people to play together?

It was all quite random really. I wanted to have people that normally would not be in a band together. I didn't want the regular men with guitars band. That's what I wanted to work against - the idea that a band should be four blokes with guitars.

Was it easy to convince all these different people about your musical ideas?

Yeah, I still have a lot of control. I still write the songs and stuff, and they bring their own parts to it. It is hard to make the music I want to make if people bring their own ideas randomly if you know what I mean.

What is your own musical background?

I was a drummer in bands before, and I play guitar and piano.

The fact that you're a drummer explains the fact that the Go! Team's music is so beat-oriented…

That's true. Drums are key about it - the distorting, compressed, break-up drum sounds.

What are some of the artists that have inspired you over the years?

You said you wanted to do something that had not been done before. Is there a general musical vision behind this record?

Definitely. I wanted the album to be surprising. I wanted it to sound messy and chaotic, but still be something you could dance to with an upbeat feel to it. Writing the album was a long process. For a long time, songs were half finished until I found a chorus or a sample that finished it. It took almost two years to make it. Even though it sounds sort of immediate and spontaneous, it took a long time to collate all these different influences.

Some people complain that the album is too short. Any reason why you chose to include some shorter tracks?

I just like shorter songs. I hate songs that extend their welcome, stay too pompous and drag on and on.

I'm glad it seems it was all recorded together. We actually recorded the different elements separately. Mixing took about a day per song. Mixing was actually really hard, because I had to go out of my way to make it sound messy.

Can you give an example?

We recorded some trumpets, but it was too clean and sounding too '80s. To me that's boring. So we put it through a compressor and then put it back again to make it sound rougher. I just didn't want it to sound too radio-ready.

That was the idea. There is no reason not to combine electric guitars and Bollywood strings for example. They're really not too different sonically - they're all kind of exciting. In "The Power Is On" I put the trumpets together with the vocals and at first I wasn't sure if that would work, but it did. With the vocals in, it all sort of clicked and it made sense.

How did you come up with the titles of the songs?

There is no message behind them. They just fit the songs somehow. But there is not a direct relationship between the title and the song. They more relate to the feel of the song.

Is there any song on the album that you're particularly proud of?

'Ladyflash' [MP3 sample] probably. It seems to seamlessly flow and it combines so many different and random sources like soul, strings and electro. That one kind of works.

So do you have any anticipation about what will happen with the album?

It all depends if people get to hear it really. It might be one of those slow burner things. We're only on a little label without a big marketing campaign. But I couldn't think of a reason why it couldn't be played on daytime radio. But if somebody would say I could have a top ten single, I'm not sure if I would want it. I much rather prefer to be that perfect size in the underground where you don't lose your credibility or could be seen as selling out. I don't want to say 'yes' to everything.

Isn't that a balance? You need to say 'yes' as well to get some of the recognition you're aiming for…

Yeah, you're right. But let me give you an example of something I don't want. An advertising agency called to ask if they could pitch one of the songs for a McDonald's advert. That's a scenario I'm opposed to.

Does it perhaps depend on the company? Jet did the Apple commercial and it broke them around the world…

I know but they don't have any credibility have they? I don't think so.