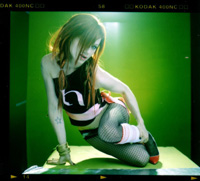 Sarah Hudson is our favorite new fag hag. She doesn't mind the title. In fact, she is proud of it. The West Hollywood pop singer (who is a cousin of actress Kate Hudson) likes to hang with the boys as much as she can. "I feel certain girls have an inner drag queen," she tells Arjan. "And I definitely have an inner drag queen going on just like Christina Aguilera, Madonna, Sarah Jessica Parker and those kind of girls."

After several delays Hudson finally released her debut album "Naked Truth" yesterday. With her cheeky lyrics, infectious pop-rock tunes, punky appearance and uncompromising view of the world, the singer is refreshingly unique among the pop tarts of her generation.

She extends her support to gays in their struggle for equal civil rights and gay marriage. "I am a huge, huge believer in love. And no matter who you love and who makes you feel good, who cares? Gay people should be allowed to get married just like straight people," Hudson says. "We all need equal rights, straight, gay, black, white, whatever, you know?"

She encourages people to openly express themselves and to not be afraid of who they really are. "I want to let kids know that it's okay if you feel different," says Hudson. " Just continue searching and discovering who you really are and what makes you an individual."

Hudson invites all the gay boys to hang with her at some of her favorite gay bars along Santa Monica Boulevard in West Hollywood. "There is nobody better to dance with than the gay boys," she laughs.