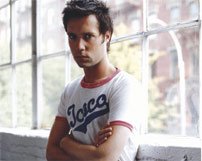 From a DreamWorks Records press release:

Singer/songwriter Rufus Wainwright is set to release "Want Two," his new DreamWorks/Geffen CD and fourth of his career, on November 16. Rufus will also make his big screen debut in director Martin Scorsese's upcoming "The Aviator," with a second film role in the 2005 Merchant Ivory film "Heights." (Click here for a still from the movie with Rufus)

The new CD also includes an extensive 20-track DVD feature. The 12-track CD comes on the heels of Wainwright's acclaimed "Want One" from 2003. The new one continues the themes explored on the previous recording, though Wainwright has said "Want Two" contains "the more daunting tracks, the operatic, weird stuff, some heavy numbers that relate to my classical sensibilities."

The DVD includes performances filmed at a live concert at San Francisco's historic Fillmore Auditorium, and includes songs from both "Want One" and "Want Two," among them "I Don't Know What It Is," "Dinner at Eight," "Go or Go Ahead," and "Oh What a World."