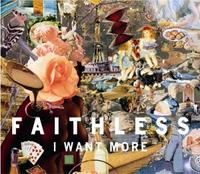 Popular British club/house outfit Faithless released their fourth new album "No Roots" earlier this summer. The group combines downbeat house grooves and spirited lyrics ("fear is a weapon of mass destruction") with a compelling visual presentation of their music.

The sleeve art of their new single "I Want More" is taken from "Arkadia Last Resort" by gay collage artist Jess Collins (1923-2004). The art is part of a larger collage (click for image) and different fragments have been used for the two CD single versions of the song and the vinyl release, which features "Arkadia" on the front and back (click for image).

The San Francisco-based Collins (who was partnered with poet Robert Duncan) worked as a chemist on military plutonium projects, but rejected its objectives and started to focus exclusively on his art in 1949. The artist became mostly known for his modern pastiche. In his collages, Collins recomposes images borrowed from children's books and old science texts.

His style is often referred to as "pencil on paper paste up," which means that instead of using pictures cut from books or magazines, he recreated the work of other painters and photographers in pencil, then cut and assembled the selection to create a visual narrative in a collage.

As you can see, the different "Arkadia" pieces include many references to other times and places, which makes up some fascinating artwork.