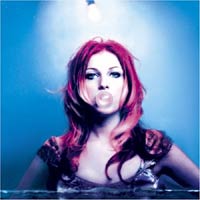 Bonnie McKee is Warner's latest shot at getting a piece of the teen pop market. McKee's debut album "Trouble" hit shelves and download sites yesterday. As far as I'm concerned "Trouble" is in deep shit.

Produced by experienced Rob Cavallo (Alanis Morissette, Goo Goo Dolls) and Bob Power, the entire album is a bland effort that makes no lasting impression. Clever productions, hooky tunes and trivial lyrics might do well on top 40 radio, but don't create the personal and artistic credibility to turn the 19 year-old Seattle singer into a star.

But then again, if you stroll too far off the beaten track, people might forget about you even quicker. Look at Pink. Oh, and while we're at, try to find the differences between Bonnie McKee and Sarah Hudson... Just for laughs.

Other pop tarts out this week: