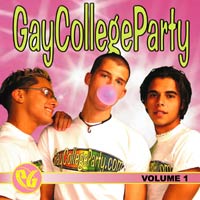 The first GayCollegeParty CD will be mixed by Seth Gold who is a resident DJ with the GayCollegeParty events. Centaur is still working on the final tracklisting but tells arjanwrites.com that "the sound is going to be very pop" and might even include some Britney Spears covers.

The album is geared to a younger than normal audience for Centaur. "The GayCollegeParty events are quite successful [in New York City] however they seem alienated by our other products for some reason," tells a Centaur spokesperson "We're gonna give this a shot and see if we can bridge the gap a little. [Gays] all enjoy the same music."

The GayCollegeParty CD will be released later this year on Centaur Records.