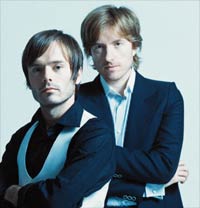 Next month Astralwerks will be releasing a new Air E.P, 'Surfing On A Rocket' that contains remixes of that song as well as new mixes of "Alpha Beta Gaga" by hunky DJ Mark Ronson. The 25 year-old Ronson previously mixed up Jay-Z, OutKast, Moby, Nikka Costa, Macy Gray, De La Soul and Nelly Furtado.

This new Air record will be an exclusive US release featuring 7 tracks in all most of which are from the duo's last album "Talkie Walkie." The E.P. will even include one brand new unreleased Air track called "Easy Going Woman." The release date for the 'Surfing On A Rocket' E.P. is October 19th.