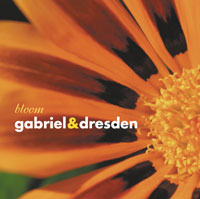 Gabriel & Dresden are scheduled to release their much-anticipated remix debut "Bloom" on September 7th on Nettwerk Records. I listened to an early advance of the CD.

Josh Gabriel and Dave Dresden are mostly known for their Billboard topping remixes for Annie Lennox ("Pavement Cracks"), Jewel ("Intuition") and Britney Spears featuring Madonna ("Me Against The Music").

With "Bloom," the duo set out to create a double disc mix album with progressive house beats that could make a lasting impact in the ever-changing dance landscape (much like the Northern Exposure and Global Underground series did).

The odds are on for Gabriel & Dresden. "Bloom" is a throbbing collection of remixes from their own catalogue (including "Lament" and "Dub Horizon") and a number of new compositions specifically written for this CD.

High point is a hard-pulsing remix of Dido's "Don't Leave Home" from her best-selling "Life For Rent." Gabriel & Dresden show off their fine production skills by layering synth beats and uplifting crescendos over Dido's moody vocals. The duo has a penchant for walking the fine line between trance and house, combining hard-hitting techno beats with the mind-altering intensity of trance.

Other noteworthy tracks include the smooth Junkie XL Club Mix of Sarah McLachlan's "World On Fire," trance smashes from Audioholics and Voyager and the mesmerizing Code 313 Dub Mix of "Anything," from pop violinist Lili Haydn. "Bloom" concludes with an acoustic version of "Imagination" from Motorcycle (Gabriel & Dresden's collaborative project with singer Jes Brieden).