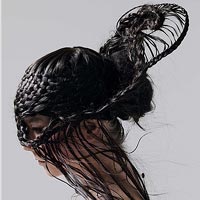 Björk is a like a good wine. You need to learn how to drink it. Often it takes repeated play to acquire the eclectic taste for Björk's music. It seems that her art is often years ahead of her time. I dare to argue that even Madonna has been inspired by classic Björk albums such as "Debut" and "Post." Bjork's seventh studio album "Medúlla" is no different. People will love it or hate it. My suggestion is that you give it at least a try.

For this Sneak Peek review, I listened an early advance copy of "Medúlla," which hits stores on August 31 (August 30 for the UK and Europe).

Recorded in eighteen different locations around the globe, "Medúlla" is a departure from the electro artistry on her previous "Vespertine." "Medúlla" is definitely a concept album with voices that replace and imitate (digital) instruments on each of the album's songs. This CD prominently features vocal harmonies, choruses, throat singing, human beatboxing and of course her own idiosyncratic vocals.

"I want to see what can be done with the entire emotional range of human voices – a single voice, a chorus, trained voices, pop voices, a chorus, folk voices, strange voices. Not just melodies, but everything else, every noise a throat makes," she told reporter Alex Ross of the New Yorker. She put it even bolder in a recent issue of Rolling Stone when she claimed that "instruments are so over."

Björk, now 38, used different choirs to represent nature on her songs. She even instructed the singers during the recording to imagine they were insects and animals. The Icelandic hero also worked with Tanya Tagaq, an Inuit throat singer, to mimic sounds of nature (like the crashing of breaking ice) on "Medúlla." Björk collaborated with human beatboxers Rahzel and Dokaka to imitate instruments and technology such as percussion and basslines.

It appears like Björk set out to emphasize the deeper organic qualities of human civilization. This musical naturalism has been at the core of the singer’s music ever since she sang the sublime "Human Behavior" on her first solo album "Debut." This naturalistic approach also coincides with the meaning of "Medúlla" ("the inner or deep part of an animal or plant structure") and one of the lead songs on the album "Oceania."

Much of this new perspective on her music might have to do with her belief in "paganism" and the spiritual conviction of returning to a universe that is entirely human-- without tools or religion or nationalities. On "Medúlla," Björk tries to get to the bottom of her ideas by communicating her philosophy in both form and substance.

Interesting detail is that Björk and R&B superstar Beyonce had planned to record a duet for this album. Unfortunately, scheduling issues prevented them from doing so. Instead, singer Kelis makes a cameo on the CD.

My favorite tracks on the album are "Oceania" for its accessibility and beautiful lyrics, "Triumph Of The Heart" for its catchy beatbox hooks and the atmospheric "Show Me Forgiveness." 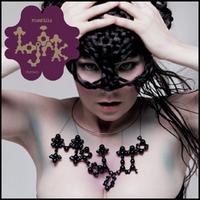 Pleasure Is All Mine (3:32 min)
A love song with a harmony of different vocal textures that create a dreamy, yet forceful soundscape with Björk's melodic vocals.

Show Me Forgiveness (1:30 min)
This track only features Björk's vocals. The song's confessional lyrics and choral feel give it a religious connotation.

Where Is The Line? (4:47 min)
A wild cacophony that includes beatbox crew Rahzel and Dokaka, a classical chorus and carefree whistling in the middle part. Vocal recording from Mike Patton (Faith No More) is used in the demonic intro of the song. Björk lyrics convey how she is running out of patience with somebody. "I want to be flexible/I'm elastic for you/Where is the line with you."

Vökuró(3:20 min)
Full of drama Björk sings a classical poem by Icelandic poet Jakobina Siguaroardottir. The poem is titled "Vigil" and the English translation is "Far away wakes the great world, mad with grim enchantment, disquieted, fearful of night and day, your eyes, fearless and serene, smile bright at me." The choir featured on this track is Schola Cantorum, an 18-member choir from Iceland.

Öll Birtan (1:59 min)
"Öll Birtan" is Icelandic for "All the light." Intense acappella track with Björk's vocals layered on top of each other.

Who Is It (4:13 min)
This is one of the more immediately accessible tunes on the album. Björk sounds upbeat when she sings, "I carry my joy on the left, carry my pain on the right." Beatboxer Rahzel lays down the entire bass and rhythm portion of the track, which is prominently featured at the end of the song. Apparently, this was recorded in only one take.

Oceania (3:29 min)
Written for the opening ceremony of the Athens 2004 Olympic Games with long-time collaborator and poet Sjón Sigurdsson. The song discusses how all life started in the oceans and that we were all little jellyfish before humans made it to land. The ocean says at the end of the song: "Little ones, my sons and my daughters, your sweat is salty - I am why."

Desired Constellation (5:02 min)
Environmentally conscious, she continues the "Oceania" theme while weeping "How I'm going to make it right?" Björk's delicate vocals are layered over a minimal electro arrangement (courtesy of sound engineer Mark Stent who previously worked with Madonna).

Sonnets / Unrealities XI (2:05 min)
Lyrics are based on a poem by E.E. Cummings called "It may not always be so." This song is the most classical in composition and execution.

Mouth's Cradle (4:08)
Vocal sampling combined with Iceland choir singers. Beatboxers Rahzel and Dokaka create rhythms and lay down the base. The song features cryptic lyrics like "the simplicity of the ghost-like beast" that most likely refer to a Nordic folk tale which has often inspired Björk.

Triumph Of A Heart (4:04 min)
Another love song that spotlights the hyper-rhythmic beatbox abilities of Rahzel and Dokaka who make trumpet sounds, create an entire percussion set and even mimic record scratching.