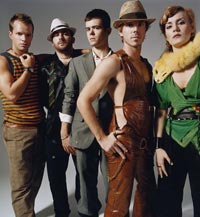 (Jake Shears is second from the right) The first time I called Jake Shears for our interview I caught him preparing for a television interview with MTV Europe. He politely asked me if I could call him back another time. "What day is today?," he asked. I told him it was Saturday and that I could call him back the day after. "Oh that would so much better. Oh wait, I'm on a plane somewhere. Not sure when, but you might have to try it a few times. What time zone are you?" Welcome to the life of a rising rock star - hectic, intense and impossible to plan. Especially now that Scissor Sisters is topping the charts in Europe and is on the verge of a major breakthrough in the U.S. Jake Shears, the flamboyant gay lead singer of Scissor Sisters, takes the pressures of being a rock star in stride when he talks about shuttling between his home in New York and the UK where the band has been burning up the charts. "Life has been very intense the last few months, but that's because we're totally brilliant" Shears smirks from his tour bus. "Jetlag hasn't been affecting me that much, but I've definitely been living an early-bird life." The anticipation about the band's success in the U.S. is mounting, but Shears tries to keep two feet on the ground. "Our success in the UK has been so over the top that I'm not really worried about what is going to happen in the States," he says. "We're very excited that the record has come out and we look forward to our U.S. tour in the fall. It has been fun and we don't take anything for granted." 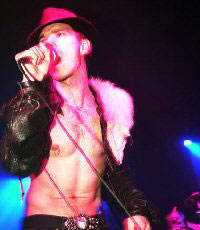 The sound of Scissor Sisters on their self-titled debut album can be described as Elton John meets Pink Floyd meets Fischerspooner. Their genre-defying music is catching on with both regular music lovers and their peers. The band has already collaborated with some of its own heroes, including Duran Duran, Elton John, The B-52s and the Pet Shop Boys. "These were incredible experiences for us," says Shears. "It is all like a dream come true." Inspired by The B-52s and rockers like Richard O'Brien (the man behind "The Rocky Horry Picture Show"), the band's music was born out of having pleasure just playing and jamming explains Shears. "It was all about our own satisfaction," he says. "There was no big idea. Our sound came about totally naturally." Jake Shears is openly gay as are some of the other group's members. "I never made a conscious decision to be out or not. This is just who I am," he says. "It is funny because people always ask me the gay question, but in Europe nobody cares. It is all about the music and performance. I hope that people will see us as a rock and roll band, not a queer band." He feels that his homosexuality might be an obstacle in the U.S. "I just hope that we're embraced at home like we were in Europe," he says. "Our music speaks to everybody. It could happen that people might end up not giving a shit." Wal-Mart, the largest music retailer in the US, does seem to care. The company has decided to ban the Scissor Sisters album from it shelves when it was released late July. "I think it is a little bit scary and hypocritical," Shears says. "You can buy violent games like Manhunt for your PlayStation, but can't buy music at Wal-Mart with the word 'shit' in it." The group does not feel obligated to edit their music for its mature content. Their song "Return to Oz" has a particular dark meaning and relevance to the gay community. Its lyrics deal with the effects of crystal meth addiction. Shears agrees that the drug has a devastating impact on some, but is coy about making any additional statements about the song. "I hate to dissect my lyrics," he explains. "I write about what is going on around me and my life. It is just a feeling. People can interpret lyrics in a lot of different ways." Shears is also quickly becoming a rock and roll sex symbol across the pond with his theatrical antics often showing off his tight upper body. The constant travelling does not seem to wear on the singer's physique. "No, it is not a low-carb diet that keeps me in shape," he laughs. "Jumping around every night on stage is the best work-out."