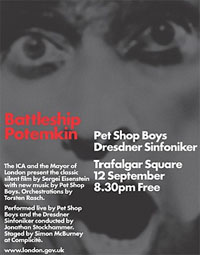 The Pet Shop Boys have finalized the soundtrack for the film "Battleship Potemkin." The 1925 silent movie will be shown at a free show in London's Trafalgar Square on September 12th. The Moscow Times reported this weekend that the score will be released on CD later this year.

German composer Torsten Rasch is currently working with the Dresdner Sinfoniker to record the classical orchestration of the soundtrack. According to Rasch, the music for the movie is "more in the direction of the Pet Shop Boys-style pop music." The soundtrack will include three Pet Shop Boys songs as well.

Philip Dodd, head of the London's Institute of Contemporary Arts, told the Moscow Times that one of the reasons he asked the Pet Shop Boys to work on this unique project is because they're gay just like Eisenstein, the maker of "Battleship Potemkin."