Dirty Vegas Heads for the Sun 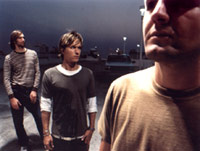 Dirty Vegas is set to return with a much-anticipated new single and album this fall. The British hipsters will release the single "Walk Into The Sun" on September 28. The track is taken from their forthcoming second album "ONE," which will hit stores on November 30.

Dirty Vegas are Paul Harris, Steve Smith and Ben Harris. The trio made a lasting impression by winning the Grammy for "Best Dance Single" in 2003 for their unforgettable pop/dance crossover tune "Days Go By"

The South London band is changing gears on their new album. Instead of solely relying on electronic instruments, Dirty Vegas has incorporated acoustic live instrumentation to create a more organic vibe. Some of their new songs like "Save Me" and "Human Love" even include an eight-piece orchestra.

Combining electronica and accoustic instruments is nothing really unique, but Dirty Vegas has proven that they're able to pull off something original.

As you might have seen in the right-hand column, I now allow advertisers to promote their products to Arjanwrites readers. This music blog has always been a labor of love and I'm hoping to off-set some of the additional bandwidth and other infrastructure costs with some advertising. My goal is to only feature advertising that is relevant to this blog and its readers, because I know how inundated we all are with unsolicited messages.

I'd like to thank the site's first advertiser Outlet Radio NetWork for its generous support. Outlet Radio Network is unique webcaster that provides a 24/7, nationwide portal of news, information and entertainment for the lesbian, gay, bisexual and transgender community and friends. Outlet currently offers two audio streams for all popular players. Listen to their "hard-bodied" Circuit Candy station while reading this blog. Also, don't forget to check out their daily gay and lesbian newswire. 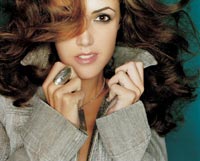 Congratulations to Arjanwrites reader Craig Edwards from Los Angeles, CA for winning the exclusive Limited Edition version of Sasha's "Involver." The CD will go out in the mail today.

This week I'm giving away a very special Cherie gift box with Cherie's self-titled debut album, a promotional DVD EPK and a unique signed photograph of the French pop singer. This package is provided to Arjanwrites by Lava Records.

Currently on tour with Clay Aiken, Cherie's success has been long in the making with vocal pipes that are nearly as large as Celine’s. A steady buzz mounted after Cherie was featured in AOL Music’s Breaker program that previously included stars like Avril Lavigne and Josh Groban.

The remixes of her debut single "I'm Ready" have been tearing up dancefloors around the country this summer. Her self-titled album is a mixture of uptempo pop and radio-friendly balladry (iTunes link), which is not often original but a safe guilty pleasure.

(EXCLUSIVE) Björk fans and others have the opportunity to purchase and receive Björk's new album in advance of its worldwide release at the end of August. The singer's record label One Little Indian has five different versions of the album available for purchase and immediate shipment. People can pick from the standard CD edition, vinly, Limited Edition Hybrid SACD/CD with poster and a DVD audio editon.

A special DVD bonus edition of Medúlla includes the original album tracks and a 45-minute video "The Inner Or Deep Part Of An Animal Plant Structure." View a clip of the video on the One Little Indian web site.

I will receive a preview version of the CD tomorrow and I hope to post a Sneak Peek review this weekend. For more details about the album artwork, read my earlier post. 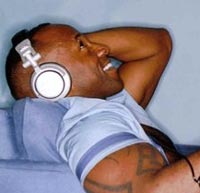 Dance label Centaur Records is celebrating the fifth anniversary of its "Global Groove" CD series this month. Developed to showcase various styles within the dance genre, the series now counts more than 24 albums by some of the most popular circuit DJs including Tony Moran, David Knapp, Julian Marsh and Alex Lauterstein.

Additionally, the Global Groove Tour coincides with the release of the next Global Groove CD from Centaur entitled "The Tour" and mixed by DJ DeMarko!. The official release date for Global Groove: The Tour is September 7, 2004.

Please click "Continue Reading" for a listing of tour dates.