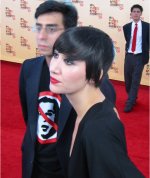 Click here for my photos from the VMA Red Carpet

Jennifer Lopez hyped it nicely when she called Miami "the steamiest and sexiest city on the planet" in her opening intro. It was only a matter of time before the MTV circus would settle on the city's bay shores. The MTV Video Music Awards extravaganza turned the dull American Airlines Arena into full splendor tonight. For three hours straight this dome was the epicenter of all that's hot in music today.

It was quite an evening indeed. Kanye lost, Alicia shined and Outkast created a minor upset by (surprisingly) winning the coveted award for Best Video of the Year.

Despite the elaborate production and the exotic location, the show lacked some of the wild spectacle and controversy that usually marks the VMAs. Celebrities were well-behaved and even bad boys Marilyn Manson and Jet drummer Chris Cester were tame compared to previous occasions.

Cester just showed off some of his raw antics in the press room when I asked him who picked his fashion for the night. "I did of course," he growled. "And it looks much better what you’re wearing and it is cheaper too."

The show itself was terribly formulaic. Instead of having a host, MTV opted to boost the production of the show with multiple stages, pyro, acrobatics and lots of camera angles. Not having one single host resulted in a serious lack of continuity.

Fashion was a major topic of conversation. Hillary Duff wore black Helmut Lang dress pants but had them cut off half-way. "This is Miami and it is hot," she explained. Also noteworthy was the sexy Cavalli dress from actress Evan Mendez.

The event's awards and musical performances once again underlined the incredible popularity of hip-hop/rap. The genre continues to rule the charts, radio and music television in a very big way.

Some eyewitness moments from this year's Video Music Awards:

Most Heated Moment: For a lack of any true sizzle during the VMA telecast, I have to say that the most heated moment of the night was waiting to pick up my press credentials for 30 minutes in the scorching Miami sun. Sweaty.

Most Interesting Presenter Duo: Marilyn Manson and Mandy Moore. They should have French-kissed. That would have been a worthy moment in pop history.

Most Painful Moment: I chatted for a while with singer Baby Spice at the red carpet. The Spice Girl was doing some interview work for a British network. I accidentally called her Mel instead of Emma. She politely corrected me, but we never spoke again. Ouch!

Most Embarrassing Performance: Jessica Simpson looked bad in that sling thing, but Hoostabank gets the lowest marks for their terrible off-tune performance.

Most Surprising No-Show: Britney and fiancé Kevin were conspicuously absent from the event. Spears was nominated for two awards, but did not win any (again). Not really that surprising.

Most Aggressive Publicity Handler: An overzealous PR handler for the Black Eyes Peas literally grabbed band members by the arm and pushed them in front of reporters. None of the Peas seemed to mind.

Most Irritating Sound: Okay, the Ying Yang Twins are funny but the screeching glutteral "yeah" every other sentence started to work on my nerves. Drop it.

Most Impressive Performance: Alicia Keys performance with Lenny Kravitz and Stevie Wonder was brilliant. The three rocked the house that propelled Keys to a new level of superstardom.

Most Stylish Rapper: Kanye West has put the message back into hip-hop. His prophetic style of storytelling was reflected in his refreshing live performance with Chaka Kahn. Dressed in a stylish pink/purple suit, he demonstrated you don't have to pimp to be able to rap.

Most Noteworthy Comment from Carson Daily: "Gwen Stefani is going to be a huge movie star. Mark my words." Actually, that was the only noteworthy comment he made.