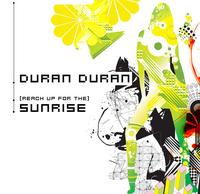 On Thursday, Duran Duran offered a first glimpse of the hip new artwork for their single "(Reach Up For The) Sunrise."

The single's sleeve design is part of a larger visual that has inspired the look of "Astronaut," the group's upcoming reunion album (in stores October 12th).

The collage reminds me of the old James Bond movie intros with the mysterious female silhouette, stylish contours and exotic flowery shapes. Perhaps "Astronaut" takes the group back to their 007 Bond anthem "A View To A Kill" from 1985.

Meanwhile, the Duran Duran promo train is moving at full steam. The "Sunrise" video is being shot at five different locations by the acclaimed Polish Brothers. The song had its global premier on Wednesday when it was played on WPLJ 95.5FM in New York City during the "Big Show." Rolling Stone features an interview with lead singer Simon LeBon this week.