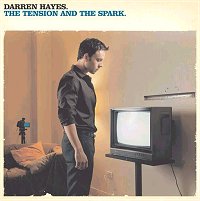 I have a crush on Darren Hayes. Ever since he sang Savage Garden's "Truly, Madly, Deeply" I have been secretly admiring the singer and his feel-good bubble pop. There is something about that cute Australian accent that makes me want to drool all over him.

To this day, Savage Garden's "Truly Madly Deeply" and "I Knew I Loved You" still hold the record as the #1 and #2 longest running songs to sit atop the Billboard Adult Contemporary chart.

After Savage Garden split in 2000, Hayes returned in 2002 with his solo debut "Spin," which was another guilty pleasure of the grandest kind. The singer is scheduled to release his second solo album "The Tension And The Spark" in the UK on September 6th. "Popular" is the first single off the album that will impact radio on August 26th.

Rumors about Hayes' sexuality have been swirling in the media ever since he first hit the pop scene. In fact, the crooner often fueled the innuendo by pulling a Ricky Martin to playfully dodge questions about his love life during interviews. Maybe he will finally reveal a bit more about himself on this newest CD, which is said to be more autobiographical than his previous work.

Hayes will be performing songs from his new album on the upcoming Manchester Pride festival in England.

A clip of Hayes' upcoming radio single "Popular" can be viewed here: