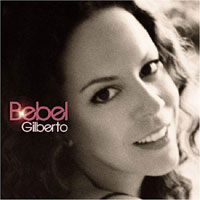 Bebel Gilberto has created the perfect soundtrack for a romantic summer evening or a lazy day at the beach. Her self-titled second album (iTunes link) is one of the finest recordings to come out this summer with its laid-back bossa nova tunes and Gilberto's infatuating crooning.

New York-born Gilberto comes from a rich musical background. Her father is famous singer/songwriter and guitarist Joao Gilberto, and her mother is the legendary jazz singer Miucha. Gilberto made her recording debut on one of her mother's albums at the age of seven. In her teens, she developed her career by performing in musicals and making cameo appearances on other people's records.

After collaborations with the Thievery Corporation, David Byrne and dance outfit Deee Lite, Gilberto finally released her first solo album "Tanto Tempo" in 2000. The record was an instant hit in the world music charts and earned the singer two Latin Grammy nominations.

For her second album "Bebel Gilberto," she made a bold move to collaborate with electronica producer Marius de Vries (Madonna, Björk, Annie Lennox) on a unique set of bossa nova compositions. The record was recorded in New York, London, Salvador and Rio de Janeiro.

Gilberto stays true to her heritage by emphasizing the delicate melodies and acoustic instrumentation of her songs. Highlights include the tracks "Simplesmente," "Every Day You've Been Away" and "Aganju."

The Latin Project created a smooth chill-out remix of "Aganju" that is available on iTunes.