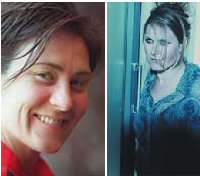 UPDATE (8/2): Richard wrote that Moyet has posted the track listing on her fan forum.

Two of my favorite female vocalists will be singing other people's songs this summer. On "Hymns of the 49th Parallel," k.d. lang pays homage to fellow Canadian artists such as Joni Mitchell, Leonard Cohen and Neil Young.

Early September, British singer Alison Moyet will release "Voice" on which she also presents a compilation of covers. The album is produced by Anne Dudley (Art of Noise) who won an Academy Award for "The Full Monty" score in 1997.

"Voice" has been surrounded by mystery. The official tracklisting was taken off the Sanctuary Records web site and removed from a formal press release for no clear reason only days after it was first published. Moyet's previous album "Hometime" was leaked months before its release much to the dismay of the singer.

Arjan was told that the popular '80s pop star does not want this to happen again and has refused to give even the song titles up until the last moment.

Sources close to the Moyet recording have provided Arjan with exclusive information about the "secret" tracklisting.

The records turns out to be a romantic songbook with covers from European and American composers. I can confirm that the following tracks will be included on the new CD:

"Voice" will hit stores in the UK on September 6th. No US release date has been announced at this time.