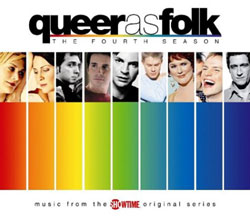 One of the best compilations to drop this summer is the soundtrack of the fourth season of Showtime's "Queer As Folk." Music has always been a key element of the popular series that depicts the high and lows of a group of gay friends.

The fourth season in particular was one of many lows. Producer Rosie Lopez, who earlier also compiled "The L Word" soundtrack, has come up with a blend of adult contemporary music that conveys the show's dramatic moments.

The record has an alt rock slant with tracks like "Attitude" from British brand Suede, "Scream" by Ima Robot and the gorgeous "You Are My Joy" by Reindoor Section.

Gutsy additions are some of the electronica-infused, alternative pop tracks such as the wild electro-clash from The Uncut on "Understanding The New Violence" and the trip-hoppy "Satellite" from TV On The Radio.

Synth pop group Goldfrapp finally gets their moment in the American spotlight with "Train." Charismatic singer Alison Goldfrapp and musician Will Gregory make up England's newest electronica sensation. They are proudly following in the footsteps of other British alternative electro acts such as Soft Cell, Portishead and Cocteau Twins with their most recent album "Black Cherry."

Most striking is the inclusion of Kodo with their song "Strobe’s Nanafushi," which is was taken from their 1999 album "Sai-So (The Remix Album)." Based on the island of Sado, this Japanese group of Taiko drummers creates pure dancefloor bliss with their acoustic tribal beats.

As opposed to the "Enter Babylon" dance parties, this "Queer As Folk" musical spin off is anything but a dance record. Only two dance tracks are included on the album: the mandatory "Cue The Pulse To Begin (QAF Theme)" from Burnside and the low-key house track "Sanctuary” from Origene (now a mainstream hit in Europe).

The soundtrack's producers have succeeded to compile a soundtrack that reflects some of the most dramatic and intense moments of the show. In the process, they have uncovered some great indie gems that are a worthy listen.