arjanwrites.com: The Two Women Behind Madonna

The Two Women Behind Madonna 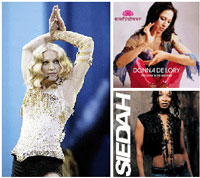 Madonna only works with the best and brightest talents. So who are some of the people that currently support the pop diva on her world tour? Meet Donna Delory and Siedah Garrett, Madonna's primary background singers and dancers for the Reinvention 2004 tour.

Fans might recognize Delory from previous Madonna tours. The singer first worked with Madonna in 1987 during the Who's That Girl tour. After that she joined the pop star on all her world tours including the Blond Ambition World Tour (1990) and the Girlie Show (1993).

Delory comes from a rich musical background. Her father played keyboards on recording sessions for Phil Spector and her mother was a singer and dancer in Los Angeles.

Hoping to bank on her popularity with Madonna, Delory has also tried to establish herself as a solo singer. Her efforts have not been very successful. Besides the dance hit "Just A Dream" (with Madonna on harmony vocals), her self-titled debut went unnoticed. Only a handful of Madonna fans might know that the icon co-wrote and produced part of the album.

Madonna has often praised Delory's talent. "I've always admired Donna's voice," said the celebrity in an interview with Billboard. "Her songwriting is poignant and heartfelt."

In 2000, Delory released her second album "Bliss," which was a collaboration with cellist Cameron Stone. The album is no longer available in stores, but can be streamed at MSN Music.

This year, Delory has embarked on a spiritual journey. Her latest records "The Lover And The Beloved" and "In The Glow" feature Sanskrit chanting and ancient Indian mantras, which was inspired by Delory's yoga practice and fascination with the Hare Krishna faith. Who says Kabbalists do it better?

Niki Haris, Madonna's other long-time background singer, was replaced for this current tour by Siedah Garrett. People that attended the concert might remember how Garrett skillfully sings the gospel interlude with Madonna in "Like A Prayer."

Garrett is mostly known for her work with Michael Jackson (music link) and her recent solo album.

In a statement on her web site, Haris writes that it is time for her to focus on her own music and family. Oddly, she refers to the Reinvention Tour as "that tour," giving fans reason to wonder about the real reason for her absence.