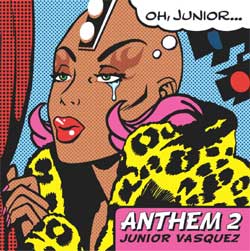 When DJ Junior Vasquez was forced to leave New York’s Sound Factory after it closed down in January, rumors were flaring that the granddaddy of house might decide to leave the club scene completely. After more than two decades behind the turntables, it was perhaps time for Vasquez to pack his bags, move to Ft. Lauderdale and enjoy retirement.

When I spoke with Vasquez in 2001, he voiced his frustration about the ever-changing Manhattan nightlife scene. The overbearing city legislation was a thorn in his side that made it increasingly difficult for him to play and have fun.

In many ways, his exit at Sound Factory might have been a blessing for Vasquez. Yes, he did lose a prestigious residency, but it was a perfect way to work on alternative music projects.

He has continued making remixes for both established and new artists. He is back with a weekly residency at New York’s Discotechque. Most recently, his remix of Jason Walker's "My Life" hit the Billboard Dance Top Ten. Solid proof that Vasquez has not lost his magic spin quite yet.

Highlights are the remixed tracks "Blood" and "House of Jupiter" of pop crooner Casey Stratton. You would never think that Stratton’s piano-driven tunes would make great dance anthems, but Vasquez shows that everything is possible.

He cut and pasted the singer's vocals, inserted a thicker baseline and threw in some extra percussion to turn the modest Stratton into a fierce circuit diva. The Stratton mixes also appeared as a single on June 15th (read my earlier review).

The CD does not feature any of the "pots-n-pans" house that is often part of Vasquez' life gigs. Instead, Vasquez adds his own twist to the original tracks with butter smooth baselines, subdued climaxes and atmospheric vocals that keep the essence of the song intact.

"Anthem 2" turns out to be a satisfying remix effort that will likely please most of Vasquez' fans. The DJ still has longevity and easily weathers the tribal house trend that is currently ruling the circuit.