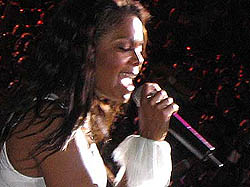 Janet Jackson made a surprise appearance at New York's Gay Pride this past weekend. Rumors were circulating for days that the pop diva would perform at the event's Pier Dance.

Jackson firmly established herself as a gay icon with the release of her "Velvet Rope album. The singer tackled homophobia on "Free Xone," in which she proclaims that the world should be free of any discrimination. She also paid homage to a friend who died of AIDS complications on the album’s hit song "Together Again."

New York promoter Mark Nelson was lucky enough to be backstage to shoot some photos. Click here for more shots from Nelson.